The city of Berlin has proven that building a new airport can in fact qualify as an epic feat of history. After approximately 14 years and two months of being under construction, the city’s new airport known as BER for its call letters is finally opening its doors this Saturday.

The construction of the airport that will serve 27 million passengers a year was marred by staggering miscalculations and the bankruptcy of several building and planning companies. In the end, a lack of oversight by local authorities contributed majorly to the fact that the project could derail as spectacularly as it did. The finished airport cost approximately $7 billion, almost three times as much as initially estimated.

Comparing with other great historical quests, the airport’s completion was quicker than the construction of the Great Pyramid of Giza, but still took just a tad longer than deciphering the human genome.

Historians studying ancient Egypt estimate that the Giza Pyramid was finished in 20 years tops, since the reign of pharaoh Khufu – who commissioned the work and was buried in it – ended after that time. The Giza Pyramid, at a height of 481 feet, remained the world’s tallest man-made structure for more than 3,800 years until the construction of Lincoln Cathedral in England in 1311.

Building BER, which can at least claim to be Germany’s third-largest airport, took more than a year longer to construct than it took to decipher the human genome. The project that included 2,800 participating researchers sharing a byline finished in 2003 – two years ahead of schedule and slightly under budget at $2.7 billion. Compared with BER construction time, the fabled siege of Troy was over in no time and the United States were even quicker to put a man on the moon. President John F. Kennedy announced the project in May 1961 and Neil Armstrong and Buzz Aldrin stepped out onto the moon’s surface in July of 1969 – just eight years and two months later. 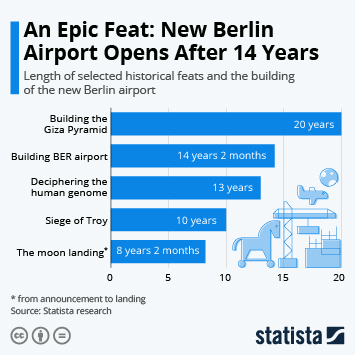 This chart shows the length of selected historical feats and the building of the new Berlin airport.