The profitability of coronavirus vaccines has been in the spotlight since U.S. President Joe Biden come out in support of temporarily lifting vaccine patents to make the production of the life-saving inoculations more financially feasible for poorer countries. EU leaders meanwhile remain divided over such a move. Company financial reports show that COVID-19 vaccine makers and developers like Johnson & Johnson, Pfizer, Moderna, AstraZeneca and BioNTech have seen their profits increase since the vaccine rollout, at times majorly.

In early May, stocks of several companies that benefit from COVID-19 vaccine sales took a nosedive on the news of Biden’s reversal. Moderna stocks, for example, were still down more than 6 percent at close on May 5, the day of the announcement. Stocks recovered somewhat as German chancellor Angela Merkel came out against patent waivers the following day.

While fluctuations in the stock market price have hurt drug makers in the short term, patent waivers would diminish the bottom line of companies involved with the development and production of COVID-19 vaccines in the long term. Pharma giants like Johnson & Johnson and Pfizer bring in billions of dollars of income every quarter from diverse sources, so the COVID bump was smaller for them. In the case of Pfizer, which has been a bigger producer than J&J, the year-over-year profit increase was a handsome 44 percent, however.

For smaller AstraZeneca, the COVID year meant that its profits doubled. In the case of Moderna, the past year has turned a Q1 loss into a profit. The case is similar for German company BioNTech, which collaborated with Pfizer on its COVID vaccine. While Q1 2021 brought in a profit of $1.1 billion, the company ran a deficit since its founding in 2008 up until Q4 2020, when it posted a profit for the first time. The $446 million earned stood in contrast to losses of almost $428 million accrued in the first nine months of the year. 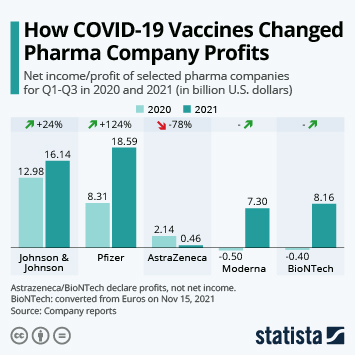 This chart shows the net income/profit of selected pharma companies in Q1 2021 and Q1 2020 (in billion U.S. dollars).