Password, 123456, qwerty - while passwords which appear on the list of the most common passwords should definitely be retired from use, even a more unique password can be easy to crack if a computer program is tasked with systematically breaking it.

As seen in data by website Security.org, adding even one upper case letter to a password can already dramatically alter its potential. In the case of an eight-character password, it can now be broken in 22 minutes instead of instantaneously in one second – an increase of more than 1000 percent.

While the added time in this case is definitely not good enough to end up with a satisfactory password, the high security gains of using characters other than lower case letters can be multiplied. When using at least one upper case letter and one number, an eight-character password now would take a computer 1 hour to crack. Add another symbol and it takes eight. To make a password truly secure, even more characters or more than one uppercase letter, number or symbol can be added. A twelve-character password with one uppercase letter, one number and one symbol is almost unbreakable, taking a computer 34,000 years to crack. 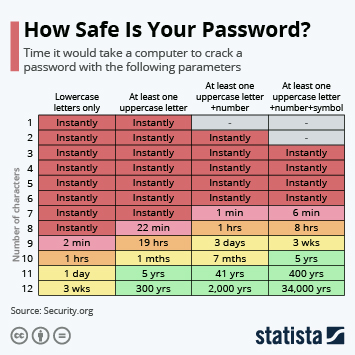 This chart shows the time it would take a computer to crack a password with the following parameters.