The consumer electronics segment in Germany covers a wide variety of products bought for personal use at home and in daily life. Whether a smartphone, a laptop, a tablet, or the ubiquitous headphones, to make just a few examples, it is common to see people using consumer electronics wherever they go. Wifi coverage in public spaces and retail or food locations allows for increased use of devices where functionality depends on an internet connection. The market as such continues to expand, especially with the continuing shift towards smart technology, as well as mobile devices and wearables. Companies compete to produce the next big thing, catering to overall consumer demand for lighter and easy to use technology. In 2021, revenue from consumer electronics in Germany amounted to 8.9 billion euros.
In a nation where watching TV is still a widespread pastime, new types of television sets have changed the consumer experience. Smart TVs, flatter and often less heavy than their predecessors, can be connected to the internet at home, thus allowing further access to already existing video streaming subscriptions, various viewing options via apps and online media libraries of public broadcasters, and consumption on a bigger screen. Around 5.5 million smart TV sets were sold in Germany in 2021. By comparison, tube or CRT TVs, have gradually ceased generating sales during the 2000s. TVs with LCD screens were the type sold the most to private consumers in Germany.

Audio and photo equipment are other important product groups on the German consumer electronics market. Headphones, big and small, plug-in and bluetooth, are used for a variety of purposes, be it listening to music, gaming, viewing content or work. Sales have gone up significantly in recent years, with 15.85 million units sold in 2021. Meanwhile, the opposite was true for digital cameras. Sales have plummeted compared to the first decade of the 21st century, with 1.57 units sold 2020. This can be attributed to the fact that most smartphones have built-in cameras, and faced with a choice, consumers will likely pick one device serving multiple purposes instead of two separate ones.
This text provides general information. Statista assumes no liability for the information given being complete or correct. Due to varying update cycles, statistics can display more up-to-date data than referenced in the text.
Published by Statista Research Department, Jan 16, 2023 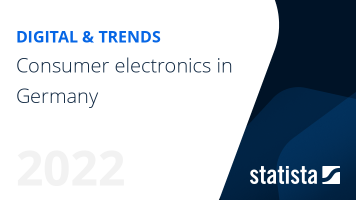 The most important key figures provide you with a compact summary of the topic of "Consumer electronics in Germany" and take you straight to the corresponding statistics.