A phablet is a hybrid of a smartphone and a tablet. The goal of the industry was to offer a device that had the portability and functionality of a smartphone and the tablet size screen experience. Customers that were looking for better performance, larger displays, and better cameras on their devices, often turned to phablets. With regards to dimensions, the screen size of a phablet was originally classified as between five and 6.9 inches, with the term phablet most used between 2012 and 2014. However, as the average smartphone size increased, the term has become less widespread.

In 2012, 20 million phablet units were shipped globally, with this figure rising to over 250 million units in 2015 as phablet usage grew in popularity. In that same year, the average selling price of phablet devices amounted to 419 U.S. dollars. In terms of active users, the beginning of 2015 saw just 20 percent of people using phablet devices. However, this grew to more than 50 percent by the start of 2017 as more and more smartphone devices with larger screens entered the market.

Phablets sit within an overall smartphone market that is expected to surpass 4.6 billion users in 2021. In the coming years, global smartphone shipments are expected to move beyond 1.5 billion units, with smartphone sales to end-users forecast to move toward the 1.6 billion mark. In terms of vendors, Samsung leads the way, accounting for more than 20 percent of global smartphone shipments. Huawei, Apple, and Xiaomi complete the top four, with all the companies releasing a range of devices offering a variety of screen sizes and features to consumers.
This text provides general information. Statista assumes no liability for the information given being complete or correct. Due to varying update cycles, statistics can display more up-to-date data than referenced in the text. 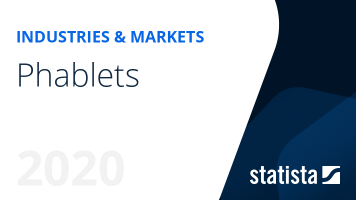 The most important key figures provide you with a compact summary of the topic of "Phablets" and take you straight to the corresponding statistics.