In lieu of the growing popularity of e-books, e-readers – portable electronic devices - are a convenient way to read digital content such as e-books, periodicals, and other documents using wireless connectivity. One of the main advantages that e-readers have over printed books is the size and portability of the devices. In comparison to laptop computers, e-readers are cheaper, tend to optimize battery life, and their display often also tends to optimize readability. The e-reader market revenue is forecast to grow in the coming years, reaching roughly 23.12 billion U.S. dollars by 2026.

The twilight of e-readers

Despite the above-mentioned advantages, e-readers have been suffering from a rapid drop-off in sales. Some of the most famous e-reading devices include Amazon’s Kindle, Barnes & Nobles’ Nook, Sony Reader, Kobo Reader, and Pandigital. They were largely used in the past few years, but digital content readers seem to prefer more classic electronic devices, like tablets and smartphones. On the one hand, e-reader providers still release new models of their devices, with Amazon's Kindle Paperwhite and Kobo Libra 2 being among the most popular in 2022. On the other hand, consumer electronics companies are trying to find their way into this new trend. For example, Huawei is experimenting with a new device - MatePad Paper – half tablet, half e-reader.

E-books remain still popular and are highly consumed around the world. In the United States, in the past ten years, over 197 million e-books were bought on average from different stores. At the beginning of 2021, 20.3 million e-books were sold in Germany, three out of 18 books were read in digital format in France, and the sales revenue of digital books in Spain amounted to roughly 126 million euros one year before. However, popular is also the illegal consumption of e-books, which is a serious threat to writers’ careers, but – considering the high number of apps and websites available for illegal e-book downloads – quite hard to stop.
This text provides general information. Statista assumes no liability for the information given being complete or correct. Due to varying update cycles, statistics can display more up-to-date data than referenced in the text. 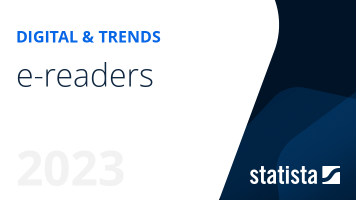 The most important key figures provide you with a compact summary of the topic of "E-Readers" and take you straight to the corresponding statistics.