Published by
Amy Watson,
Sep 8, 2022
The U.S. book industry has faced challenges ranging from the increased popularity of digital media to the hardships faced by retail bookstores, but books remain an important part of consumers’ daily lives. Print book sales figures have improved and unit sales now consistently surpass 700 million per year. Print also remains the most popular book format among U.S. consumers, with 65 percent of adults having read a print book in the last twelve months.
Meanwhile, audiobook sales now amount to over 1.5 billion U.S. dollars in revenue, and the number of titles produced also grows each year. E-book sales are also on the up, though print will remain the dominant format for many years to come.

From a retail standpoint the market has seen sweeping changes in recent years. Although book stores in the U.S. are still bringing in several billion U.S. dollars annually, online retailers such as Amazon continue to restrict the ability of large physical retail chains to compete. Even major booksellers are affected, with Barnes & Noble having been acquired by an investment management firm and later suffering hundreds of store closures in the early stages of the COVID-19 pandemic.

The future of the book market

In 2021, U.S. book revenue grew across multiple categories, and despite the gains in digital book sales, print remains dominant. Over 3.5 billion U.S. dollars of the 9.5 billion-dollar total was derived from hardback books, and paperback and mass market book sales revenue also increased year-over-year. Meanwhile, physical audio revenue has been dropping since 2017. When it comes to e-books, it is difficult to get an overall picture of this arm of the market without full disclosure from all publishers, but the available data shows that trade e-book revenue in the U.S. remained stable at around 1.1 billion U.S. dollars in both 2020 and 2021.

Print continues to be the dominant revenue driver for the U.S. book market. Whilst print media may not be as prosperous as it once was, the print book is a healthier format than popular opinion may suggest, and printed books remain popular among readers both in the United States and other major markets around the world.

In the following 5 chapters, you will quickly find the 28 most important statistics relating to "Book market in the U.S.".

The most important key figures provide you with a compact summary of the topic of "Book market in the U.S." and take you straight to the corresponding statistics.

Book formats in the U.S. 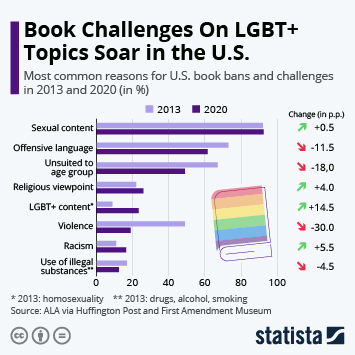 Book Challenges On LGBT+ Topics Soar in the U.S. 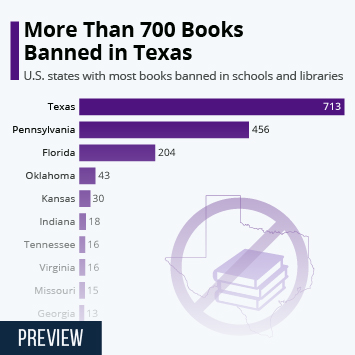 More Than 700 Books Banned in Texas