Published by
Amy Watson,
Jun 2, 2022
News consumption among audiences in the United States now most commonly occurs online, with social media the go-to option for many. In fact, data from a 2021 survey found that close to 48 percent of U.S. adults used social media for news often or semi-regularly. Using social networks to keep up to date is a habit often associated with Gen Z and millennials, but this is changing. Now, older consumers are also demonstrating a preference for social platforms over legacy news media.

How is news consumption changing?

The results of a survey held in early 2022 showed that the majority of adults between 18 and 44 years old used social media as their daily news source, and, interestingly, 45 to 64-year-olds were marginally more likely to do so than to watch network news. This left those aged 65 years and above the only remaining group with a clear preference for network news, and adults in that age bracket were also more inclined to use social media, cable news, or online-only news sites than newspapers. Indeed, print news publications have long struggled to retain audiences, but this growing trend to move online rather than get news via television could foreshadow the gradual decline of TV news. Primetime cable news network viewership was particularly low in 2021, falling back down to pre-pandemic levels (and in the cases of Fox News and MSNBC, even lower than in 2019).

Meanwhile, podcast news is gaining ground among younger audiences. A higher percentage of Gen Z consumers use podcasts for news daily than network or cable news, and young consumers are also more likely to consider podcasts a trustworthy news source than older adults. However, the relationship between news consumption and trust in news does not always work in the way one might expect.

The issue of trust

Trust in news is a complex topic, with consumers’ political stance, a news brand’s reputation, and myriad other factors affecting how audiences perceive the news they read and whether they consider the source to be reliable. Especially significant though is consumers’ willingness to get news regularly from a source they have difficulty trusting. Radio and newspapers maybe among the least used but are the most trusted outlets, whereas social media, the increasingly popular place to get news and information, ranked as the least trusted news source in the United States.

In the following 4 chapters, you will quickly find the 27 most important statistics relating to "News in the United States".

The most important key figures provide you with a compact summary of the topic of "News in the United States" and take you straight to the corresponding statistics.

News Industry in the U.S. 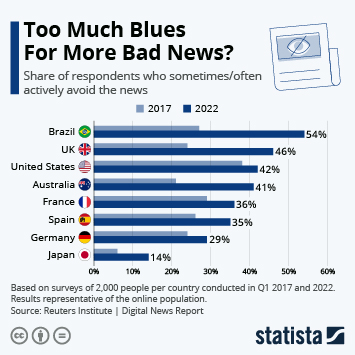 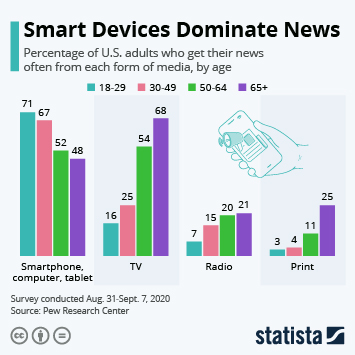