Published by
Amy Watson,
Nov 19, 2021
Television news has long been an integral part of Americans’ daily lives. Even despite the boom in online news consumption, both network and cable news networks still pull in large audiences. The average number of TVs tuned into morning network news programming on major networks ABC, NBC, and CBS in 2020 amounted to between two and four million. Evening network news also performed well that year, with ABC bringing in an average evening audience of over seven million. Meanwhile, the leading cable news network in the United States in each year from 2017 to 2020 was Fox News, followed by CNN and MSNBC.

Although a global study found that online outlets were the preferred source for news consumption in the United States, television news viewership has not been as greatly impacted by the availability of digital news as other traditional outlets. A 2021 survey revealed that the leading offline news sources used in the United States were local television and national news networks, though consumption habits varied according to age.

Adults aged 65 or above proved most likely to watch cable news every day, whereas younger consumers were less inclined to do so. Network news was also a popular news source among older audiences, 48 percent of whom reported watching network news on a daily basis. This demographic continues to drive television news consumption in general, and both cable and network news play a significant role in driving discussion in the United States.

Trust in national and local television news fell between 2016 and 2021, though local news was still considered the more reliable source. Further data showed that network and cable news ranked among the most trusted news outlets, outperforming online-only outlets, social media, and podcasts. News audiences also turned to network and cable for what they felt to be trustworthy news on the COVID-19 outbreak. Trust is of growing importance to consumers, and as such, TV news companies must avoid aligning themselves too heavily with a political figure or movement and take care to ensure their content is accurate and unbiased.

Television news may not have gone the way of the printed newspaper, but is not infallible. Cord-cutting is on the increase and unless TV news providers make a concerted effort to remain relevant, their audiences will wane. It is possible that the future of TV news will also be online, but networks must act sooner rather than later before their viewers look elsewhere.

In the following 4 chapters, you will quickly find the 22 most important statistics relating to "TV news in the U.S.".

The most important key figures provide you with a compact summary of the topic of "TV news in the U.S." and take you straight to the corresponding statistics.

Cable TV in the United States 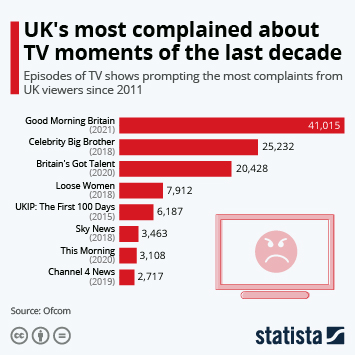 most complained about TV shows in the UK