Published by M. Ridder, Mar 7, 2022
Coffee is one of the most widely consumed beverages worldwide and in the United States. Millions of consumers across the country cannot imagine starting their day without a hot cup of coffee. Coffee is produced from the Coffea plant, which naturally contains caffeine with levels varying between individual plants. There are over 120 species of the plant. The two most which are responsible for most of the global coffee production are Coffea arabica and Coffea canephora, more commonly known as Arabica and Robusta, respectively.

Where are the largest markets for coffee?

On the coffee-growing level, South America was ranked as the top coffee-producing region, producing almost 80 million 60 kilogram bags per year. The U.S. has, by far, the largest coffee market worldwide, with revenues reaching over 80 billion U.S. dollars. Brazil follows in distant second place, followed by Japan and Canada. When it comes to trade, the two leading coffee exporters to the United States are Colombia and Brazil. Both countries exported over one billion dollars of coffee to the U.S. in the most recent year.

Coffee consumption in the U.S.

American coffee consumption has slightly fluctuated in recent years yet has remained around two cups per day per capita. The top location for coffee consumption among Americans is at home, followed by the office. The most popular ground coffee brands for at-home coffee consumption included Folgers and Starbucks, based on sales. Folgers is owned by The J.M. Smucker Co. and accounted for over one billion U.S. dollars of sales in 2019.

Although people have been drinking coffee for hundreds of years, there are still new trends entering the market every year, such as cold brew coffee. Cold brew coffee is, as the name implies, brewed with cold or room temperature water over an entire day and has a higher caffeine concentration than regular coffee. Young Americans are more likely to rate cold brew coffee as excellent or very good than their older counterparts.

In the following 4 chapters, you will quickly find the 30 most important statistics relating to "Coffee market in the United States".

The most important key figures provide you with a compact summary of the topic of "Coffee market in the United States" and take you straight to the corresponding statistics.

Coffee market in the UK

Coffee shops and cafes in the U.S. 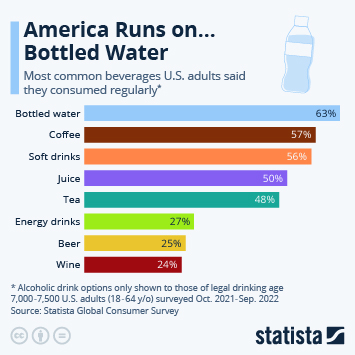 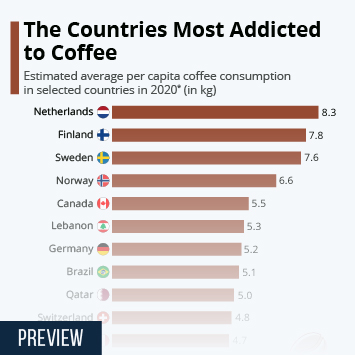 The Countries Most Addicted to Coffee