Published by
M. Garside,
Mar 9, 2022
Rare earths include a list of 17 chemical elements. Within the last decade these elements have become extremely sought after. The end uses of rare earths include the production of magnets, batteries, catalyzers, displays, and more. Many industries are highly dependent on rare earths as a result of their functionality. Global rare earth element production amounted to around 280,000 metric tons of rare earth oxides in 2021. With the largest known reserves worldwide, it is not surprising that China's rare earth production alone accounted for roughly 60 percent of the total global production in 2021. Canada, Greenland, and Australia are also expected to offer significant sources into the future.

China remains the largest global rare earth producing country after years of having this distinction. The most important provinces for Chinese production are Inner Mongolia and Sichuan. In 2021, the United States was distantly the world's second-largest producer of rare earth elements, having produced some 43,000 metric tons of bastnäsite mineral concentrates in rare earth oxide equivalent, as well as 230 metric tons of rare earth compounds and metals. Nevertheless, the U.S. is also a major importer of rare earths. Nearly 80 percent of all U.S. rare earth imports originate from China, while the rest comes from Estonia, Malaysia, Japan, and other countries.

Due to the fact that the Chinese rare earth industry is controlled by the state, there are only a few larger companies from other countries that dominate the market. Among the the best known non-Chinese rare earth companies is Lynas Corporation from Australia. Prior to filing for bankruptcy in June 2015, the United States-based Molycorp was also a leading non-Chinese rare earths company. Other leading companies are Iluka Resources, Galaxy Resources, and Kidman Resources, all headquartered in Australia. With Mountain Pass in California, Molycorp previously held the largest deposit of rare earth elements outside of China. As of June 2017, Mountain Pass sold for 20.5 million U.S. dollars to MP Mine Operations LLC, an American-led consortium that includes the Chinese company Leshan Shenghe Rare Earth Co. as a non-voting minority interest.

In the following 7 chapters, you will quickly find the 31 most important statistics relating to "Rare earths industry worldwide".

The most important key figures provide you with a compact summary of the topic of "Rare earths industry worldwide" and take you straight to the corresponding statistics. 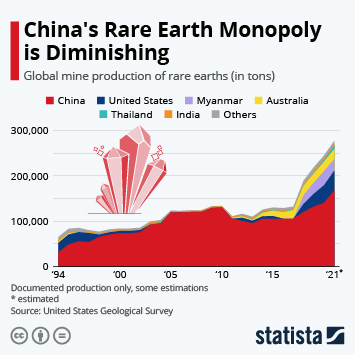