Whole Foods Market is an U.S.-based grocery retailer with an emphasis on organic and natural food products. The firm’s roots date back to September 20, 1980, when the retailer opened its first store in Austin, Texas. The company’s headquarters still remains in the Texan capital city.

In August 2017, Whole Foods Market was acquired by Amazon.com, a merger which caused a stir in both the tech and grocery retail industries. In its latest annual report, in 2017 Whole Foods Market had net sales amounting to about 16 billion U.S. dollars. Most of their sales were generated within the United States. Following the Amazon acquisition, Whole Foods retained its physical store presence, and accounted for 500 locations in Amazon's physical store portfolio for 2020.

In its early years, the food retailer was especially known for its high food standards and even the brand name was used synonymously with ‘health’ and ‘organic’. Lately, Whole Foods Market has been accused of having overly high prices and overcharging. However, there is hope that the online retail giant will make Whole Foods Market more affordable, and perhaps consumers will stop jokingly referring to it as “Whole Paycheck”.

In order to restore its key reputation of being natural and reliable in consumers' minds and to differentiate itself from its stronger up-and-coming competitors, Whole Foods Market started a huge national branding campaign. The New York Times estimated the budget for this campaign between 15 and 20 million U.S. dollars. In 2017, Whole Foods Market spent about 113 million U.S. dollars on advertising worldwide. In 2020, based on a survey ranking customer satisfaction with leading U.S. supermarkets, Whole Foods received a customer ranking of 77 out of 100.
This text provides general information. Statista assumes no liability for the information given being complete or correct. Due to varying update cycles, statistics can display more up-to-date data than referenced in the text.

Largest grocery chain in the U.S., based on retail sales
The Kroger Co.

Leading supermarkets in the U.S. 2021, based on retail sales 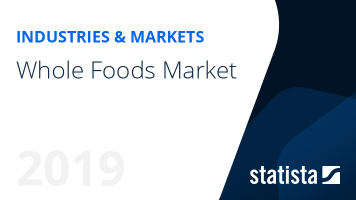 The most important key figures provide you with a compact summary of the topic of "Whole Foods Market" and take you straight to the corresponding statistics.