Published by Jan Conway, Aug 19, 2022
Spirits, otherwise known as liquor or hard alcohol, are a type of distilled beverage which contains a minimum 20 percent alcohol content. Typically termed as alcohol by volume, the higher the alcohol content the harder or stronger the liquor. Different spirits are composed of different fermented products. Gin, for example, is produced using juniper berries, while tequila is made from blue agave. Other spirits include vodka, rum, whisky, brandy, schnapps and more. The most commonly produced spirit in Canada is whisky.

On the whole, about 2.6 standard drinks (17ml of pure alcohol per drink) of spirits were sold per person per week in Canada in 2021. The Northern Territories were significantly ahead of the national average at 7.9 drinks per week. Vodka was the leading type of strong alcohol among Canadian consumers, as over 20 percent of Canadians stated that it was their favorite spirit. Rum and whisky ranked second and third, respectively, within the same period.

In the following 5 chapters, you will quickly find the 46 most important statistics relating to "Spirits market in Canada". 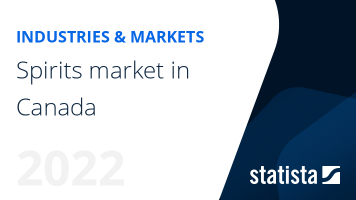 The most important key figures provide you with a compact summary of the topic of "Spirits market in Canada" and take you straight to the corresponding statistics.