Published by Jan Conway, Apr 8, 2021
Martini, Gin & Tonic or Bloody Mary – the list of popular cocktails and long drinks enjoyed for several occasions is quite extensive. The classic cocktail Bloody Mary includes vodka, which mixes well with fruit or vegetable juices due to its subtle taste. Based on generated sales, Diageo-owned Smirnoff was the best-selling vodka brand worldwide with a sales volume of 25.6 million 9 liter cases. Based on the calculated brand value, the Baijiu brand Moutai is the global leader.

Over the past few years, spirits market sales made up over a third of total alcohol sales in the United States. Retail sales of distilled spirits reached nearly 97 billion U.S. dollars. The majority of spirits sales occurred off-premise, with about 51.32 million 9 liter cases sold on-premise and 187.4 million 9 liter cases sold in the off-premise sector. Broken down by category, vodka took the lead in terms of volume sales of the spirits industry, followed by whiskey and rum, respectively.

Per capita consumption of spirits in the United States amounted to 1.73 gallons in 2019. In that year, the states with the highest consumption volume of distilled spirits were New Hampshire, District of Columbia and Nevada.

In the following 5 chapters, you will quickly find the 32 most important statistics relating to "Spirits Industry". 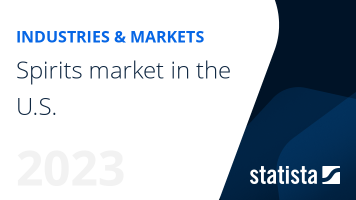 Go to report Spirits market in the U.S.
Top Seller

The most important key figures provide you with a compact summary of the topic of "Spirits Industry" and take you straight to the corresponding statistics.

Rum market in the United States