Published by Jan Conway, Dec 8, 2021
Alcohol is a common name for fermented or distilled beverages which contain ethyl alcohol, otherwise known as ethanol. Fermented alcoholic beverages such as beer and wine contain lower amounts of alcohol, typically between two and 20 percent, while distilled alcoholic beverages such as spirits and liqueurs contain 20 percent or more alcohol by volume.

Beer is the beverage choice for most Canadian's, accounting for a 38 percent share of the total alcoholic beverages market. Like in other markets though, its importance is diminishing. Its share of the market has slipped 15 percent since 2010. Sales volume of beer declined in 2020 again, as it has for every year since 2008. Despite this gloomy picture, the number of breweries has been increasing, trying to capture an ever smaller slice of the market. The wine market, whose share of the alcoholic beverages has grown during beer's decline, was dominated by red wine, with sales reach 4.17 billion Canadian dollars in 2020. White wine had sales of a comparatively low 2.63 billion dollars in the same year. Spirits have also grown to fill the void left by beer, reaching six billion Canadian dollars in sales in 2020, a 34 percent increase since 2011. Whisky is the preferred distilled beverage, with sales totaled almost 1.8 billion Canadian dollars in 2020.

In the following 4 chapters, you will quickly find the 34 most important statistics relating to "Alcohol consumption in Canada". 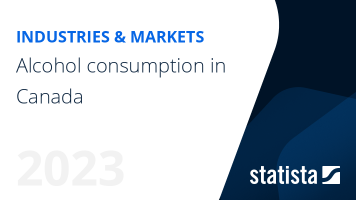 The most important key figures provide you with a compact summary of the topic of "Alcohol consumption in Canada" and take you straight to the corresponding statistics.