Published by Jan Conway, Mar 11, 2022
Beer has been a significant element in human history and the identity of Canada since its introduction by European settlers in the seventeenth century. An alcoholic beverage made from a malted grain (usually barley), water, possibly a herb or spice for flavor such as hops, the whole being fermented with yeast, beer has been brewed for thousands of years. Archaeological evidence abounds—hieroglyphics, statuettes, written records—illustrating the human occupation of making beer going back six to nine thousand years. Brewing was arguably one of the first scientific endeavors. Indeed, brewing is widely regarded as both an art and a science.

Canada is very much a nation of beer drinkers. Despite a general decline in sales over the last few years, beer is still the most popular alcoholic beverage among Canadian consumers. The brewing industry is betting on Canadians remaining beer enthusiasts as the number of breweries per capita keeps increasing year after year. This also reflects a growing trend in North America of the brewing giants losing market share to smaller brewers. Canada's most populous province, Ontario, was also the region with the greatest amount of breweries, 269 in 2020.

Along with a decline in beer sales, Canadians have been drinking less beer every year. Total per capita consumption dropped to 69.3 liters in 2020, representing a 20 percent decline since 2010. Despite having the most breweries, Ontario was not the leading province in terms of beer consumption. In fact, Ontario was second to last, with only Nunavut having lower consumption. Yukon had a per capita sales volume of 109.5 liters in 2020, well over the national average of 72.3 liters. In terms of weekly beer consumption, this translates to 6.5 standard drinks for Yukon, compared to the national average of four.

In the following 5 chapters, you will quickly find the 38 most important statistics relating to "Beer market in Canada". 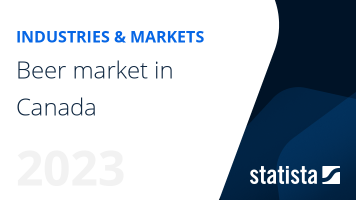 The most important key figures provide you with a compact summary of the topic of "Beer market in Canada" and take you straight to the corresponding statistics.