Published by
John Elflein,
Oct 13, 2021
The Zika virus is spread mostly by bites from infected Aedes aegypti or Aedes albopictus mosquitoes, but mother-to-child and sexual transmissions are also possible. Infected persons often have symptoms such as a low-grade fever, red eyes, joint pain, rash, and sometimes muscle pain and headache. As there are many other diseases with similar symptoms, there was no special attention paid to Zika until more recently. This rapidly changed after the latest outbreak in Brazil which began in early 2015 and ended in November of 2016 with an offical declaration from the World Health Organization. In 2015, increased evidence pointed to infections with this virus which could cause serious birth defects and neurological problems, the most well-known of which was microcephaly.

The latest outbreak began in early 2015 in Brazil, although the first cases seemed to have already appeared in 2014. One theory is that the virus arrived during the 2014 Football World Cup. Zika virus infections were reported on all continents, however, the Americas were the most at-risk-part of the world. In 2017, it was estimated that over 120 million people in Brazil were at risk of Zika virus infections, compared to 32 million people in Mexico and 29.5 million in Columbia. At the height of the epidemic in 2016, there were over 651 thousand cases of Zika virus in Latin America and the Caribbean. However, in the year 2020 there were only around 18,700 cases in this region.

The Zika virus in Brazil

Brazil was by far the country most affected by this epidemic, reporting the most cases of people infected with the Zika virus worldwide. In 2016, Brazil reported almost 274 thousand Zika virus infections. However, by 2017, this number had already dropped significantly, with only 31,750 cases reported. In the year 2020, there were around 16 thousand cases of Zika virus in Brazil. In that year, the northeastern state of Bahia was by far the Brazilian state most impacted by the Zika virus.

The Zika virus in the United States

In the following 7 chapters, you will quickly find the 43 most important statistics relating to "Zika virus disease".

The most important key figures provide you with a compact summary of the topic of "Zika virus disease" and take you straight to the corresponding statistics.

The Zika virus in Latin America

Lyme disease in the U.S.

Mosquito-borne diseases in the U.S. 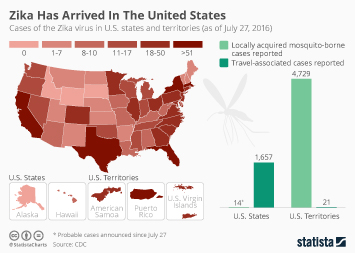 The Zika Virus Has Arrived In The Continental US.