Avocado is a stone fruit with a creamy texture that grows in tropical climates. In comparison to other fruits, which primarily consist of carbohydrates, the avocado fruit has a very unique consistency due to high content of healthy fats.

Even though the fruit was introduced to the consumer market some time ago, it has recently become incredibly popular among Americans. The retail sales of avocados in the United States amounted to 2.6 billion U.S. dollars in 2020, but decreased to just under two billion U.S. dollars in 2021. Avocado was previously one of the leading product categories in the fresh department of the United States, but has recently seen a drop in sales, with negative growth of about 1.7 percent.

The consumption of avocados in the United States amounted to about three billion pounds in 2021. That same year, 93 percent of Hispanic households in the U.S. reported purchasing avocados that year, compared to only about 70 percent of the total population. A recent survey regarding the driving factors for buying avocados in the U.S. revealed that about 76 percent of consumers believe that avocados are healthy, and some 72 percent of respondents think that the fruit has good fats. Not all consumers, however, are convinced to add it to their shopping basket. About 62 percent of respondents cited "too perishable" as a main barrier for buying avocados, while around 73 percent considered avocadoes to be frequently "too expensive" to buy.
This text provides general information. Statista assumes no liability for the information given being complete or correct. Due to varying update cycles, statistics can display more up-to-date data than referenced in the text. 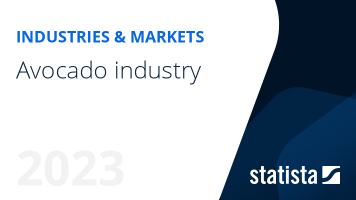 The most important key figures provide you with a compact summary of the topic of "Avocado Industry" and take you straight to the corresponding statistics.

Consumption in the U.S.