Fruit has long been praised as a healthy and natural alternative to processed sweets and refined sugar. The size of the fruits and vegetables market in the United States has seen an overall increase in the last decade. As of 2021, the sales of fresh fruit accounted for about half of the total produce segment sales in the United States. In 2020, the consumer price index (CPI) for fresh fruit stood at an average of 357.1, down from 360.1 in the previous year.

In general, the Dietary Guidelines for Americans recommend increasing fruit and vegetable intake. Fruit consumption rates in the United States had been decreasing for several years, but saw almost a 50 pound increase per capita in 2019. The per capita consumption of fresh fruit, however, States fell from about its peak of 117 pounds in 2019 to about 111 pounds in 2020. The majority of fruit intake in the U.S. was in the form of fresh fruit and fruit juices, with canned, dried, and frozen fruit accounting for a much smaller proportion.

Americans consume a variety of fruits in their everyday lives; a 2020 survey found that bananas were the most widely purchased fruit among U.S. consumers. Apples, strawberries, and grapes were also widely consumed by U.S. consumers. On average, Americans ate 27.2 pounds of fresh bananas per capita in 2020, significantly more than any other fruit.
This text provides general information. Statista assumes no liability for the information given being complete or correct. Due to varying update cycles, statistics can display more up-to-date data than referenced in the text.

Per capita consumption of fresh fruit in the U.S.
110.6 lb

Per capita consumption of juices in the U.S.
18.1 liters

U.S. away-from-home consumption share of fruit and vegetables by source 2014 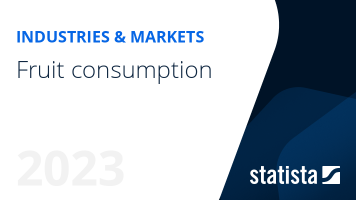 The most important key figures provide you with a compact summary of the topic of "Fruit consumption in the U.S." and take you straight to the corresponding statistics.