Published by Statista Research Department, Jan 12, 2022
Officially known as the Soft Drinks Industry Levy (SDIL) and informally branded by the media as the 'Sugar Tax', the UK chancellor George Osborne first announced the government's intentions to tax drinks based on sugar content in his Budget speech in March 2016. With a focus on sugar-sweetened beverages, the levy aims to target the manufacturing and import of such drinks in the United Kingdom by taxing products depending on their sugar content. Two bands have been proposed: one applying to soft drinks with five or more grams of sugar per 100ml and another to soft drinks with a sugar content over eight grams per 100ml; 54.3 percent of soft drinks at major retailers are potentially taxable. Pure fruit juices and milk-based drinks, as well as those below the sugar content threshold, are exempt, while some of the soft drink industry's biggest names will experience increases in price.
The Sugar Tax is largely a response to increasing levels of obesity, particularly among children, with 20 percent of girls and 35 percent of boys between the ages of six and ten years predicted to be obese by 2050. A recent report by the NHS expects over 80 thousand lives of the next generation to be saved as a direct result. Furthermore, the anticipated 520 million British pounds raised in the tax's first year will provide funding for sports in schools.

Arguments for and against the Sugar Tax are largely led by two main opposing factions: the soft drinks industry itself and health campaigners. Health campaigners cite the fact that soft drinks have no intrinsic nutritional benefits and can easily be reformulated to contain less sugar, in addition to the fact that it tends to be those from lower social classes and families with children that have the highest levels of sugar consumption. Other widely referenced factors include the prevalence of price promotions on unhealthy products and targeted advertising. On the other hand, soft drink manufacturers claim they were already in the process or have already reformulated the sugar content of their drinks and point to decreasing levels of per capita soft drink consumption. Over the past few years, levels of sugar intake have decreased and the industry feels targeted since other food and drink categories high in sugar content, such as breakfast cereals and confectionery, have been ignored.

Other countries that have introduced a similar tax, such as Finland, France and Mexico, have had varying degrees of success depending on the source consulted. In the United Kingdom, the sugar tax is expected to be implemented by April 2018 and with 69 percent of the public supporting its introduction, it remains to be seen whether the tax will have an effect on soft drink consumption as it is predicted to.

In the following 3 chapters, you will quickly find the 23 most important statistics relating to "Sugar tax and soft drinks in the United Kingdom (UK) ".

Statistics on the topic
Per capita consumption of soft drinks in 2018
211.5L
Annual spend on fruit juices, vegetable juices and other soft drinks
8.98bn GBP
Potential share of carbonates contributing to tax base
51% 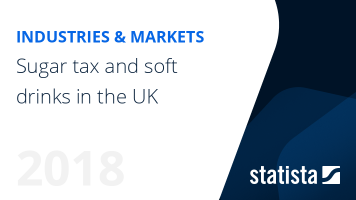 The most important key figures provide you with a compact summary of the topic of "Sugar tax and soft drinks in the United Kingdom (UK) " and take you straight to the corresponding statistics. 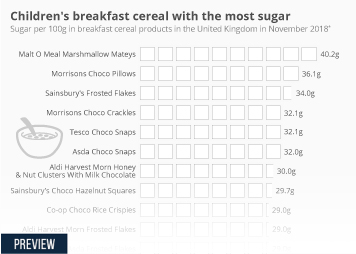 Children's breakfast cereal with the most sugar uk