Although the United Kingdom officially left the European Union at the end of January 2020, its access to the European single market was largely unaffected during the eleven month transition period that lasted until December 31, 2020. From January 1, 2021 onwards, the UK and EU's economic relationship is now defined by the terms of the EU-UK trade and cooperation agreement (TCA), which is far less substantial and will likely have to be built on in future.

The first month of Brexit: How did it go?

In January 2021, the UK economy contracted by 2.9 percent following a slight uptick in growth in December. The ongoing economic restrictions brought about by Coronavirus lockdowns make it difficult to draw any firm conclusions about how Brexit has affected overall growth however. The UK economy is currently around the same size as it was in early 2015, after COVID-19 wiped out five years of economic growth in little more than a year. Other traditional indicators such as the unemployment rate are also less instructive than usual, especially as the government is currently helping to pay the wages of 4.7 million workers on it's job retention scheme. In terms of UK/EU trade however, the sudden fall in imports and exports is likely a more direct result of Brexit. Compared with December 2020, the value of goods exported to the European union fell by 6.6 billion British pounds, while imports fell by 5.6 billion pounds. Furthermore more than half of UK exporters had experienced recent difficulties in exporting goods, with the most common complaint being additional paperwork. Of these businesses that have faced export challenges, half of them blamed the end of the EU transition period, although Coronavirus was seen as a factor by a third of these businesses.

How will the UK economy perform in 2021?

Despite the economic headwinds of Brexit and COVID-19, the UK economy is expected to grow by four percent in 2021, and then by 7.3 percent in 2022. Much of this growth will be driven by the British economy returning to full strength after lockdown ends, which may be as early as Summer 2021 due to the UK's successful vaccination drive. This is in contrast to the rest of Europe whose vaccination response has been hindered by supply issues, vaccine hesitancy, and a generally slow bureaucracy.

Looking beyond 2021, the UK has made it clear that it intends to make-up for shortfalls in EU trade by pivoting towards Asia, and investing more in it's trading relationships with India and China. This would require a fairly substantial change in existing trade patterns, with exports and imports dominated by trade with Europe. The fact that Europe's share of global GDP has been falling for some time now may justify this more global outlook, but the sheer size and proximity of the EU probably limits the UK's ambitions somewhat.
This text provides general information. Statista assumes no liability for the information given being complete or correct. Due to varying update cycles, statistics can display more up-to-date data than referenced in the text.
Published by D. Clark, Nov 17, 2022

Recent challenges that export businesses have experienced in UK May 2021 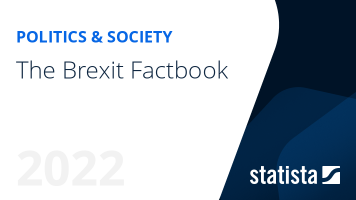 The most important key figures provide you with a compact summary of the topic of "Brexit and the UK economy " and take you straight to the corresponding statistics.