Since French explorers brought the first colognes and scented waters to North America in the early years of European settlement, the desire for fragrances has seen the market grow into a multi-billion dollar industry. Moreover, a prediction on the future size of the market based on 2015 levels suggests that the flavor and fragrance market in North America is set to exceed the 7 billion U.S. dollar mark in 2020.
Like many luxury markets in the United States, and around the world, the fragrance market is shaped by celebrity and globally-recognizable designer names. Elizabeth Taylor was the first celebrity to create her own line of beauty fragrances. The success of this commercial move has continued despite her death in 2011, with Elizabeth Taylor White Diamonds generating 23.2 million dollars in sales in 2015, the largest amount of any women’s fragrance in the United States. White Diamonds has been described as having a floral scent, which is one of the most popular perfume scents among American women, second only to vanilla scent.

The appeals of celebrity and luxury have helped fragrances gain a significant presence in the culture of the United States. As of May 2017, 92 percent of American women stated that they wore fragrances, with 41 percent doing so on a daily basis. Such consumer behavior means that perfume and cologne retailers in the United States have a broad target market available. The luxury of having a fragrance on-hand or available to consumers at all times therefore does not necessarily have to cost an arm and a leg. The growth of online retailing now means that price competition among fragrance retailers in the United States has intensified. According to a 2015 consumer survey, 69 percent of consumers considered getting the best price as a very important factor when shopping online for fragrances.
This text provides general information. Statista assumes no liability for the information given being complete or correct. Due to varying update cycles, statistics can display more up-to-date data than referenced in the text.
Published by Statista Research Department, Feb 16, 2022

Value of the North American flavor and fragrance market 2019 & 2025

Global market share of the leading flavors and fragrances manufacturers 2021 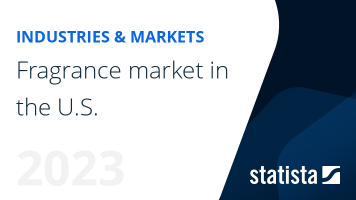 Go to report Fragrance market in the U.S.
Top Seller

The most important key figures provide you with a compact summary of the topic of "Fragrance Market in the U.S." and take you straight to the corresponding statistics.