Brexit and the food and beverage industry - Statistics and Facts

Published by
Nils-Gerrit Wunsch,
May 20, 2019
The food and beverage industry in the United Kingdom is the largest manufacturing sector, with a 16 percent share of total manufacturing by turnover, totaling 76.8 billion British pounds in 2015. Following the Brexit vote, however, the industry is in jeopardy: the future status of the United Kingdom and its relationship with the European Union will have huge consequences depending on how it positions itself relative to the single market and the freedom of movement for EU workers.
Drastic changes have been seen in the months following the vote, such as climbing prices of key food commodities. A number of multinational corporations have already increased the price of their products, citing the rising cost of ingredients, as was the case in Unilever's 'Marmitegate' scandal. The loss of value of the British pound has caused major issues for British food manufacturers in particular by hitting profit margins, as well as problems with inflation. Isolation from the European Union internal market would increase the costs of not only the sourcing of food products, but also the technology required to produce it. Disruptions to the supply chain are inevitable, particularly with the added difficulty of future trade arrangements.

Currently, the United Kingdom imports a lot more of its food than it exports, causing a trade deficit of 5.8 billion British pounds in 2016: only 60% of UK-grown food is consumed in the UK and the EU is the UK's largest trading partner. While no one knows precisely what will happen, there are a number of potential trade scenarios. Either there will be no agreement with the EU, resulting in a 'hard Brexit' and the adoption of the World Trade Organization's default position, in which the EU's Common Customs Tariff (CCT) rates will be applied. Rates vary depending on the type of product, with astronomical maximum rates for some food categories, and a significant negative impact on the farming industry. A 'soft Brexit' would involve the development of some form of trade agreement, ideally a bilateral trade agreement similar to the type that Switzerland enjoys, without any border controls or tariffs.

The farming industry is also under threat, with the EU's Common Agricultural Policy (CAP) making up to 60% of farm incomes through EU subsidies. Although the government has promised to match these direct payments at least until 2020, an even greater issue relates to EU freedom of movement policies. The agricultural industry relies on huge numbers of unskilled workers, many of which are EU citizens. They deliver high quality and affordable food, which will potentially result in increased prices with their loss. Farms are already reporting a shortage of labor as workers leave the UK for greener, European pastures.

The most important key figures provide you with a compact summary of the topic of "Brexit and the food and beverage industry" and take you straight to the corresponding statistics. 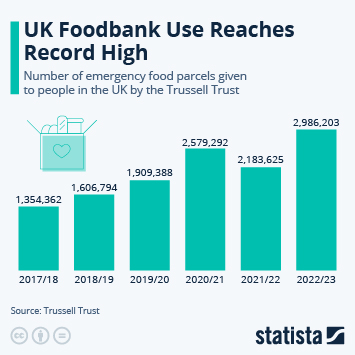 UK foodbank use continues to soar 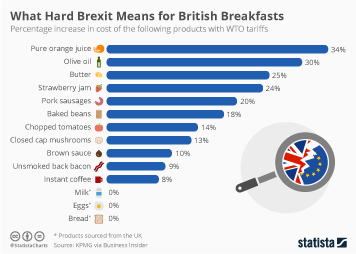