Published by Statista Research Department, Dec 3, 2021
Military veteran refers to a person who has served or is serving in the armed forces. According to the U.S. Census Bureau, in 2019, there were more than 17 million veterans in the United States. In 2019, around 6 million U.S. veterans had served in the Vietnam War, and less than two thousand remained from wars prior to World War II.
After the Second World War, veterans’ organizations pushed for and got the G.I. Bill enacted, which gave veterans access to free or subsidized education and health care. As of 2019, about 6.45 million veterans had attained some college or associate's degree, and more than 5 million veterans had obtained a Bachelor's degree or higher. The G. I. Bill also had a significant economic impact. With the aid of the U.S. government, veterans were able to buy housing and establish themselves as a part of the middle class. In 2019, about 8.1 million veterans, aged 65 and older, had an income above the poverty level, while roughly 494 thousand veterans of the same age group were living below the poverty line.

Veterans are often subject to illnesses directly related to their military service. The percentage of the Military Disability Rating is intended to reflect the degree to which the medical condition impairs the veteran’s ability to work. The higher the percentage, the worse the disability. In 2019, about 1.66 million veterans had a service-connected disability rating of 70 percent or higher.

Special governmental organizations and programs have been created to support veterans. The United States Department of Veterans Affairs (VA) is a government-run military veteran benefit system. The VA had outlays of about 218 billion U.S. dollars in 2020, and it is estimated that the financial support for military veterans will be at over 334 billion U.S. dollars by 2026.

In the following 4 chapters, you will quickly find the 22 most important statistics relating to "Veterans in the United States".

The most important key figures provide you with a compact summary of the topic of "Veterans in the United States" and take you straight to the corresponding statistics.

Veteran health in the U.S. 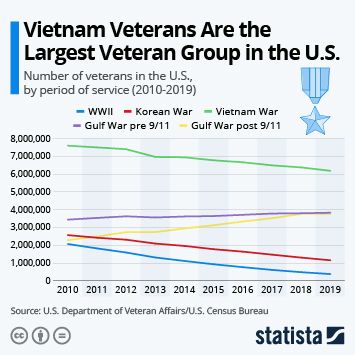 number of veterans on the U.S. by service period 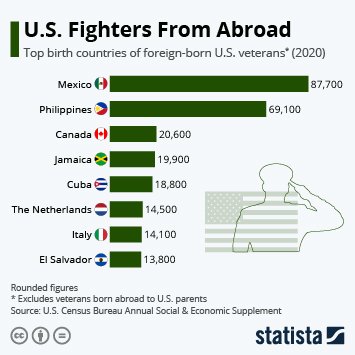 us veterans from another country