Published by Statista Research Department, Feb 25, 2022
Coconut water is the clear liquid found inside of an immature coconut. It is comprised of 3.2 percent sugar, less than one percent of fat and protein, and water which make up an over 90 percent share of its main contents. Coconut water has long been widely used as a beverage, mainly in the Tropics, either fresh, bottled or in cans. Coconut water has also been used as medicine, as an alternative intravenous rehydration fluid and, for treatment of diarrhea in Jamaican folk medicinal practices.
Coconut water is by far the leading plant-based water available for sale worldwide. In the past, coconut water accounted for 96 percent of the volume share in the global sale of all plant-based water with over 700 million liters sold and with a market value of about 2.2 billion U.S. dollars. In the U.S., the industry for coconut water has experienced a continued growth in market size with a projected 1.49 billion U.S. dollars in generated revenue forecasted for 2022, from 612.5 million in 2015. Some of the top brands that process coconut water in the U.S. include: Vita Coco, Zico, and One’s Coconut Water. Processed coconut water in the U.S. is typically sold in ordinary cans, Tetra Paks, or plastic bottles. With an average energy content of about 14 calories per 100 gram of coconut water, it has also more recently been marketed in the U.S. as a natural energy or sports drink.

Coconut water contains several minerals that include: Potassium, Sodium and Calcium and 9.9 milligram Vitamin C per 100 gram. In recent years, the coconut water industry in the U.S. has been plagued by allegations of unfounded and rather misleading health benefit claims by some manufacturers. This litany of concerns and accusations has led to warnings from the FDA as well as several class action lawsuits over false advertising claims.

In the following 4 chapters, you will quickly find the 22 most important statistics relating to "Coconut water ". 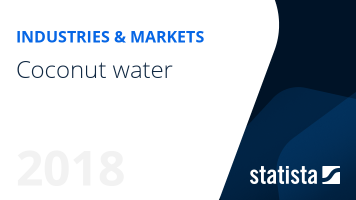 The most important key figures provide you with a compact summary of the topic of "Coconut water " and take you straight to the corresponding statistics.