Published by
Nils-Gerrit Wunsch,
Mar 25, 2022
Dietary habits across the Western world are evolving. One of the major drivers of food and drink consumption change is a more health-conscious consumer. This is visible in the United Kingdom, where one of the leading reasons for being vegan is the desire to lead a healthier lifestyle. We can see this type of dynamic turned on its head for organic food. UK consumers of organic food consider themselves to be healthier consumers than members of the general population do. The organic food and drink market in the UK currently generates over two billion British pounds and is growing annually. Meanwhile, the number of vegans in the UK has also been growing for years and will likely increase further.

The shift towards meat-free products

Meat is increasingly seen as a product that is less healthy than other food and damaging to the environment. In an attempt to avoid or reduce the intake of meat, eating behaviors are changing. As a result, a sizeable share of the UK population is consuming more meat-free meals. A sizeable number of British consumers try to live vegetarian as much as they can. These flexitarians still eat meat on occasion, and they number in the millions. Together, plant-based alternatives and vegetarian products generated a sales revenue of nearly 1.5 billion British pounds in the UK.

The fight against sugar

The UK government introduced a tax on sugary drinks to encourage producers to reduce sugar content in their products, as well as portion sizes. After the introduction of the Soft Drink Industry Levy in 2018, the sales share of soft drinks with eight or more grams of sugar per 100 milliliters fell by eleven percent, compared to sales in 2015. The market for carbonates with reduced sugar content reached over 4.8 billion British pounds the year the levy went into effect. Low and no-calorie drinks made up over a third of the carbonated soft drink market. However, the soft drink industry is only one part of the picture. The overall consumption of sweeteners, whether sugar or not, is declining in the UK.

In the following 6 chapters, you will quickly find the 37 most important statistics relating to "Health and wellness food trends in the UK".

Statistics on the topic
Sales revenue of organic food and drink in the UK
2.6bn GBP
Share of the general population that consider themselves healthy eaters
57%
Share of consumers in the UK who prioritize health over affordability when buying food
59% 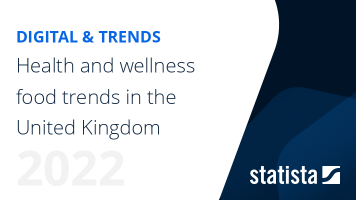 The most important key figures provide you with a compact summary of the topic of "Health and wellness food trends in the UK" and take you straight to the corresponding statistics.