Health and wellness food trends in Europe - statistics and facts

Published by
Nils-Gerrit Wunsch,
Feb 21, 2022
Health and wellness foods have been one of the defining trends for the food and drink industry in the past few years. Consumers continue to care deeply about how what they eat and drink affects their well-being. Health concerns influence a variety of dietary decisions. In Europe for example, over half of vegans stated they changed to this diet due to health concerns. In Germany, almost a quarter of consumers who do not eat dairy products avoid dairy for health reasons. In neighboring Poland, health motivates half of the dietary supplement consumers, who take these products as prophylactics. These examples are just the tip of the iceberg; the global health and wellness market is forecast to be worth one trillion dollars by 2026.

Health is one of the three big reasons for people to eat less meat, together with animal welfare and environmental concerns. The reduction in meat is accompanied by a need to replace it. Meat-imitating substitutes are increasingly fulfilling this need. With the progressively better taste and texture quality comes an increased consumer demand. In Europe, the market value for meat substitutes amounts to 1.7 billion euros. This is the result of a decade of continuous growth, which is expected to continue way into the middle of the century. Grain-based meat substitutes have the highest market share, closely followed by soy-based products.

Compared to the European dietary supplements, organic food, or even meat substitutes market, probiotics still play a small role. The market value of probiotics is approximately 560 million dollars. Online stores account for almost one hundred million dollars of the total market value. Consumers perceive probiotics as healthy additions to their diet. Gastrointestinal health applications make up the lion's share of the probiotics market, with immune health applications following as a distant second.

In the following 4 chapters, you will quickly find the 34 most important statistics relating to "Health and wellness food trends in Europe". 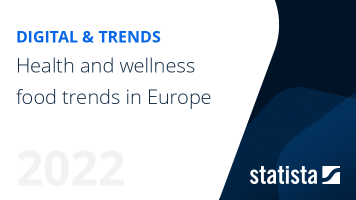 The most important key figures provide you with a compact summary of the topic of "Health and wellness food trends in Europe" and take you straight to the corresponding statistics.