Functional water, which belongs to the non-alcoholic beverage category, is water which offers additional health and other functional benefits. It is enhanced by supplemental ingredients, which are also known as aquaceuticals, such as vitamins, minerals, acids, herbs, raw fruits or vegetables. An exception is coconut water, which is entirely extracted from young coconuts. In 2020, around 450 billion liters of packaged water was consumed worldwide, compared to 212 billion liters of carbonated drinks.
The functional water market is facing a rapid growth in the U.S. This could result from consumer preferences shifting from sugar and carbonated beverages to water. Over the last few years, flavored and functional water became a go-to beverage of choice for many Americans. The sales of enhanced bottled water in the United States amounted to about 4.11 billion U.S. dollars in 2018 and was projected to reach 5.3 billion U.S. dollars by 2022. According to a survey, 16 percent of Americans stated that functional attributes are the leading factor they consider when drinking their preferred non-alcoholic beverage. Functional water is gaining popularity among the U.S. population as a result of consumers’ increasing desire for more than only hydration when selecting their healthy beverages. About 63 percent of U.S. consumers are looking for a good source of calcium in their beverage and around 60 percent desire it to be a good source of antioxidants.

Coconut water, which is considered to provide various health benefits such as antioxidant properties, is a popular functional plant-based water. The sales volume of coconut water worldwide amounted to about 796.8 million liters compared to 33.2 million liters of other plant water. The coconut water market has experienced a rapid growth with global sales reaching some 2.2 billion U.S. dollars compared to only 533 million U.S. dollars in 2011. U.S. market has also seen a growth of about 27 percent.
This text provides general information. Statista assumes no liability for the information given being complete or correct. Due to varying update cycles, statistics can display more up-to-date data than referenced in the text.
Published by Statista Research Department, Jan 12, 2022

Retail sales of functional beverages in the U.S.
18.6bn USD

Share of water launches featuring a functional claim in the U.S.
17%

The most desirable nutritional attribute for healthy beverages among U.S. consumers
Calcium source

U.S. healthy beverages: distribution of most desirable features 2016, by type 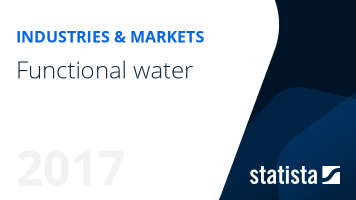 The most important key figures provide you with a compact summary of the topic of "Functional water" and take you straight to the corresponding statistics.