Fragrances or perfumes are a mixture of fragrant essential oils or aroma compounds that are used to give a smell to certain products. In this instance, the fragrance market is used to give a smell to the human body. The word originates from the the Latin pronunciation, 'perfumare' which means 'to smoke through'.
This is a lucrative industry that has many internationally successful niche brands. There are many countries within Europe that are famous for their fragrances, such as France and Italy. However, the practice of perfumery dates back centuries to countries from all over the world, such as India and the Middle East, where there are many spices and essentials oils.

The market for prestige fragrances is on the decline in many European countries, with market value dropping considerably since 2011, by an estimated 4.9 percent. Countries like France have seen steady growth in its fragrance market value since 2006, a contrast to the rest of Europe, with 2013 showing a value of 1.9 billion euros.

Russia is a country showing signs of growth within this industry with the amount of stores increasing year-on-year. In 2008, there were only 2110 perfumery or cosmetic chain stores, and in 2014 this number quadrupled to 9350. The most popular fragrance companies in Russia are LVMH Moet Hennessy Louis Vuitton SA, which is a French multinational luxury goods conglomerate founded with the champagne company Moet & Chandon and the cognac manufacturer Hennessy. This is one of the world’s leading prestige fragrance companies.

The trade of perfume is flourishing throughout Europe, with countries like Italy having increased export. The most popular area for perfume shops in Italy is Lombardy. Germany takes most of its perfume imports from France, with a total import value of 1.4 billion euros. Germany also is the highest importer of essential oils into Europe, with a volume share of 23 percent. The most popular essential oil type for import is the Orange smell, closely followed by Other Mints. With regards to German export of fragrances, the United Kingdom is the leading importer, with a value of 641 million euros in 2014.
This text provides general information. Statista assumes no liability for the information given being complete or correct. Due to varying update cycles, statistics can display more up-to-date data than referenced in the text.
Published by Statista Research Department, Feb 16, 2022

Leading global cosmetic and fragrance companies based on revenue 2016

Most important import countries for body care products into Germany 2021 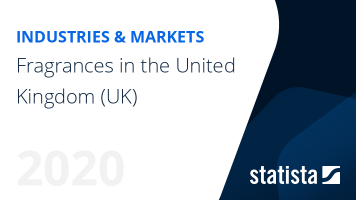 The most important key figures provide you with a compact summary of the topic of "Fragrance market in Europe" and take you straight to the corresponding statistics.