Published by Statista Research Department, Sep 16, 2019
In 2016, 29 percent of citizens in the EU 28 stated to read print media every day or almost every day, a decrease of seven percent compared to five years earlier in 2011. Over the same period of time, the Western European magazine industry saw a steady decrease in print circulation revenues of consumer magazines, from 17.4 billion U.S. dollars in 2011 to an estimated 14 billion U.S. dollars in 2016. Even though digital circulation revenues showed an upward trend, this was not enough to counter the overall loss of consumer magazine revenues. Consequently, magazine advertising expenditures in the European Union declined similarly, dropping from 10.1 billion euros in 2009 to 7.1 billion euros in 2015.
In the United Kingdom, a survey on the frequency of magazine reading found that nearly a third of UK adults read print magazines either once a week or more often, whereas for digital magazines the same was true for only 19 percent of respondents. Weekly TV magazines made up the largest share in UK print magazine market revenues, with television weekly TV Choice being the leading title based on print retail sales volume. The best-selling women's magazine in the UK as of 2016 was lifestyle and fashion title Cosmopolitan, published by Hearst Corporation.

In the rest of Europe, magazine consumption showed a similar declining trend. In Spain, magazine reading penetration dropped from 47.7 percent to 37.3 percent in the last decade, whereas in France, the average daily time spent reading magazines per capita fell from 25 minutes in 2010 to 23.8 minutes in 2016. In Germany, the number of persons who stated to read magazines during their free time several times a week decreased by more than four million between 2013 and 2016. The best-selling consumer magazine in Germany in 2016 was news magazine Der Spiegel, whereas in Spain the leading consumer title was weekly celebrity and women's magazine Pronto.

In the following 5 chapters, you will quickly find the 30 most important statistics relating to "Magazine industry in Europe". 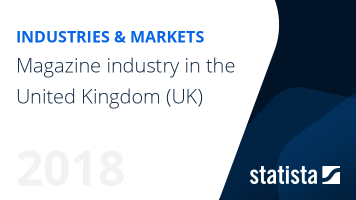 The most important key figures provide you with a compact summary of the topic of "Magazine industry in Europe" and take you straight to the corresponding statistics.