Estée Lauder Companies has risen to prominence in the global beauty market since being founded by Estée Lauder and her husband Joseph in New York City in 1946. Nowadays it is seen as one of the largest cosmetics companies worldwide and in 2021, it was listed among the leading global beauty manufacturers with over 16 billion dollars in revenue. After a long series of acquisitions, Estée Lauder kept on gaining traction in the market, playing an especially important role in the prestige cosmetics and fragrances industry. Some of its most renowned brands are MAC Cosmetics, Clinique, Origins, Too Faced, and La Mer.

Estée Lauder has demonstrated strong growth in the last few years, generating about 17.7 billion dollars in sales in 2022, up from about 10.8 billion in 2015. The majority of their sales are made in Europe, the Middle East, and Africa; but the sales attributed to the Asia/Pacific region have grown steadily since 2010, surpassing the Americas. Estée Lauder’s largest product categories are skincare and makeup, while the fragrance and hair care categories combined count for a little less than 20 percent of net sales. In 2022, the company reportedly spent around 307 million U.S. dollars on research and development, a notable increase compared to the previous years.

Brand awareness for Estée Lauder reached remarkable percentages in several countries, including the United States and the United Kingdom, where it exceeded 70 and 80 percent respectively. The company’s popularity is no secret, given its vast brand portfolio. One of the brands to stand out the most is Clinique, which in 2022 was valued at approximately six billion U.S. dollars, up from five billion U.S. dollars in the previous year. That same year, Clinique earned eighth place in a ranking of the leading personal care brands worldwide. In the United States, both usage and popularity of the Clinique brand reached a share of over 20 percent.
This text provides general information. Statista assumes no liability for the information given being complete or correct. Due to varying update cycles, statistics can display more up-to-date data than referenced in the text.
Dominique Petruzzi
Research expert covering Cosmetics, Personal Care, Health & Hygiene industries.
Get in touch with us now
Published by Dominique Petruzzi, Nov 3, 2022 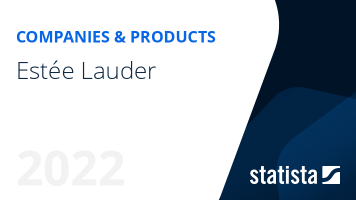 The most important key figures provide you with a compact summary of the topic of "Estée Lauder Companies Inc." and take you straight to the corresponding statistics.