Published by M. Szmigiera, Jun 29, 2021
Despite increased international attention and resources from states and other non-governmental institutions, the number of people falling victim to human trafficking around the world continues to grow. Between 2008 and 2019 the number of human trafficking victims identified worldwide more than tripled from 30,961 to 105,787. Though such statistics also lead to a degree of optimism among investigators and human rights advocates as it suggests that additional focus has led to greater exposure of the issue. After all, trafficking in persons is an illegal practice that is shaded in secrecy, and it is therefore nearly impossible to measure it in its entirety.

The two primary forms of exploitation people are trafficked for are forced labor and sexual exploitation, with regional variances on the proportion of each. Although sexual exploitation remains the primary from, the prevalence of forced labor as the criminal’s motivation has grown in the last decade. This in part explains the rising share of male victims in human trafficking according to the United Nations. Their analysis suggests that the vast majority of male trafficking victims are trafficked for the purpose of forced labor, some 67 percent in 2018.

For women, traditional understandings of human trafficking remain the norm, with 77 percent of female victims being trafficked for sexual exploitation. Whilst forced labor and exploitation of other forms are certainly an issue, the disturbing images of women falling victim to the global sex trade remain as omnipresent as ever. In the United States, this is reflected in the dominant share of female victims in calls to the national hotline in conjunction with a prevalence of calls related to sex trafficking over those related to forced labor.

On the international level, South and Central Asia was the region with the second-most trafficking victims in 2019. Despite the diminished capacities and resources of South and Central Asian countries to combat trafficking when compared with their North American or European counterparts, the region conducted the most prosecutions in 2019. Accordingly, these prosecutions resulted in numerous convictions. With the number of convictions worldwide more than doubling over the last decade, there is some reason to believe that improvements are being made in removing the terror of human trafficking and exploitation from many of the world’s most vulnerable people. Unfortunately, the true extent of this heinous trade remains unknown.

In the following 5 chapters, you will quickly find the 33 most important statistics relating to "Human trafficking ".

The most important key figures provide you with a compact summary of the topic of "Human trafficking " and take you straight to the corresponding statistics.

Crime and penitentiary system in China 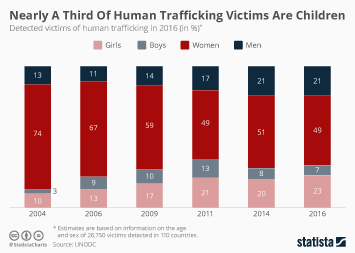