Vehicles in operation in the United States - statistics & facts

Published by
Mathilde Carlier,
Jan 21, 2022
To get around town, the United States relies heavily on motor vehicle transport – A preference which is only partially linked to longer trip distances compared to other parts of the globe. In the third quarter of 2021, there were just under 284 million vehicles registered in the United States. The country recorded just under 228.7 million people holding a driver's license in 2019, with the number of vehicle-miles traveled reaching its peak in that same year before slumping down due to the pandemic. This reliance on private vehicles was most visible in Southern states, which comprised almost half of the car owners in the country, and people between 45 and 74 years old.

A diverse sector on a slow recovery

The majority of motor vehicles were registered in California, the country's most populous state. Approximately 30.4 million vehicles were registered here in 2020, including roughly 14.2 million automobiles and around 15 million private and commercial trucks. It comes as no surprise that the Golden State also boasted the highest number of drivers holding a valid license: 27.2 million in 2019.

General Motors and Toyota are the largest automotive manufacturers in the United States, slowly edging out Ford. Between January and December 2021, General Motors was the manufacturer selling the most light vehicles to customers in the United States. U.S. vehicle sales reached over 1 million units in November 2021, as the global semiconductor shortage depleted the available stock for both new and used vehicles across the country. Toyota and General Motors both recorded a strong impact on their inventory across their various brands.

Over three-quarters of the U.S. population were car owners, as a 2021 survey highlighted. Car owners tended to heavily rely on their vehicles, with automobiles being cited as the main mode of transportation for consumers’ daily commute, while close to half of people’s daily commutes were less than 30 minutes.

The United States boasted the longest road network worldwide. At just under 6.6 million kilometers in 2020 (approximately 4.1 million miles), it was around 38 percent longer than the Chinese road network. Longer distances are, however, only part of the incentive towards mass motorization in the country. Gasoline prices have been rapidly increasing in 2021, soaring to just over three U.S. dollars per gallon as Brent crude oil prices rebounded from the 2020 COVID-19 pandemic. However, the U.S. contrasts with other countries. In the second quarter of 2020, German gasoline prices were around 5.53 U.S. dollars per gallon, compared to 2.5 U.S. dollars in the United States. This contributed to the country’s reliance on motor vehicles, especially as gasoline is the preferred type of fuel for American drivers in 2020.

In the following 4 chapters, you will quickly find the 29 most important statistics relating to "Vehicles in use in the U.S.".

The most important key figures provide you with a compact summary of the topic of "Vehicles in use in the U.S." and take you straight to the corresponding statistics.

Gasoline-powered vehicles in the United States 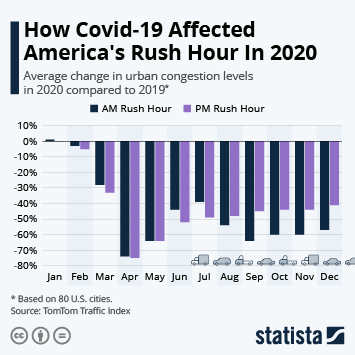