Published by
Mathilde Carlier,
Mar 29, 2022
Based in Detroit, the American automotive manufacturer General Motors (GM) has consistently ranked among the leading automakers worldwide in terms of revenue. In its 2021 fiscal year, General Motors (GM) generated 127 billion U.S. dollars in revenue—a slight increase compared to the 2020 fiscal year, which was still nearly 15 billion U.S. dollars below pre-pandemic financial performance. In contrast, GM’s sales volume has steadily been dipping down since 2016, reaching below 6.3 million units in 2021. The 2016 sales drop corresponds with a loss of around 257 million U.S. dollars from GM’s operations in Europe during that same year, leading the automaker to sell its Opel and Vauxhall brands to the PSA Group in March 2017. The brands represented between 11 and 12 percent of GM’s sales.
In March 2022, the automaker announced the temporary closure of its Fort Wayne (Indiana) plant between April 4 and April 11 in order to endure the global automotive chip shortage. This production halt is expected to affect pickup truck models such as the Chevrolet Silverado and GMC Sierra. Chevrolet was the manufacturer’s most profitable vehicle brand in the United States in 2021.

China and the U.S. are GM's largest markets

Most of the GM’s revenue in 2021 came from its North American operations, which represented around 80 percent of GM’s overall earnings that year. In the United States, GM reported market shares of over 15 percent, trailed only by the Toyota Motor Corporation. The Chevrolet Silverado was also one of the best-selling light trucks in the country. Light trucks have been steadily gaining popularity in the country, as opposed automobile sales which have been on the decline. Buick—one of GM’s subsidiaries—ranked among the five most reliable car brands in the U.S., based on car owner perception. Cadillac and Chevrolet were firmly in the top 15, and Cadillac and GM’s eponymous brand also recorded high consumer satisfaction in the country.

That said, the U.S. were surpassed by China in terms of unit sales. General Motors sold almost three million vehicles in China, which represents GM's largest market in terms of vehicle sales. Although most of its cars are assembled in the United States, GM also manufactures a large percentage of cars in Asia: Most of GM’s cars dedicated to the Chinese market are produced locally, and a Buick was the first car to be produced in Shanghai’s GM plant in 1998. The automaker’s joint venture with SAIC and Wuling was also among the leading new energy vehicle brands in China in 2020, which was the country with the largest plug-in electric vehicle fleet as of that year.

A leader in the global electric vehicle market

In recent years, the automaker has committed to becoming carbon neutral in its global operations and products by 2040. This includes plans to sell exclusively zero-emission vehicles by 2035. In line with this goal, GM spent around 7.9 billion U.S. dollars in research and development in 2021—its largest R&D expenditure since 2018.

GM was one of the leading plug-in electric vehicle producers, holding a global market share just under eight percent in 2021. This gave the automaker a head start compared to its main competitors, Stellantis and Ford, which recorded a smaller market share worldwide. The Wuling Hongguang Mini EV, manufactured by GM’s joint venture with SAIC and Wuling, was the second best-selling plug-in EV model worldwide in 2021.

While GM is one of the global EV market leaders, it has faced stiff competition in its home market. In the U.S., Tesla dominates the EV market with their Model Y and Model 3 in first and second ranking, respectively, followed by Ford’s Mustang Mach-E which raked third among the best-selling plug-in electric cars in 2021. With under 25,000 sales in the country, the Chevrolet Bolt sold over five times less than Tesla’s Model 3.

In the following 5 chapters, you will quickly find the 29 most important statistics relating to "General Motors".

The most important key figures provide you with a compact summary of the topic of "General Motors" and take you straight to the corresponding statistics.

Focus on the U.S. market 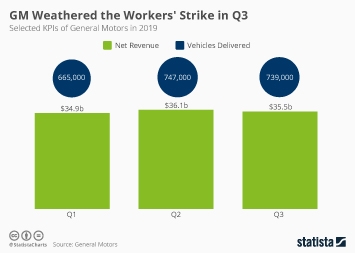