Published by
Christina Gough,
Jul 11, 2021
The Philadelphia Phillies are a professional baseball franchise competing in Major League Baseball. The team was established in 1883 and is a member of the National League's East Division. The franchise is owned by the Phillies limited partnership, with John S. Middleton acting as the primary person accountable for the team.
In 2020, the Philadelphia Phillies were among the top ten most valuable franchises in the league, with a franchise value of a little over two billion U.S. dollars in 2021. In 2020, the Phillies generated around 140 million U.S. dollars in revenue, and the team’s operating income for that season amounted to a deficit of 67 million U.S. dollars, a harsh decline as will all other professional sports clubs due to the COVD-19 pandemic.

More than two million people attend games of the Philadelphia Phillies each season at Citizens Bank Park, which has been the home for the team since 2004. The average regular season attendance was around 33.6 thousand in 2019, marking the highest average attendance since 2013. The average ticket price for games of the Philadelphia Phillies has remained relatively steady over the past few years, with fans having to part with an average of just over 36 U.S. dollars to watch a game during the 2019 season. The team’s Twitter and Facebook accounts have over 1.7 million fans each.

In the following 4 chapters, you will quickly find the 40 most important statistics relating to "Philadelphia Phillies". 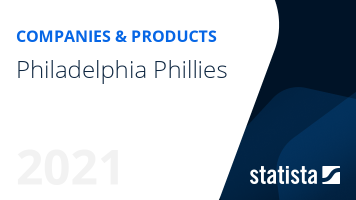 The most important key figures provide you with a compact summary of the topic of "Philadelphia Phillies" and take you straight to the corresponding statistics.