Published by Statista Research Department, Feb 7, 2022
The sharing services market in the United States consists of companies which provide services to connect owners of an item with people who wish to use that item. Through the service, the owner provides access to the item for a limited period, for which they directly receive a fee. Often sharing services are provided using an online platform, although this is not always the case. The three most prominent categories of sharing services are home sharing, ride sharing and office sharing (also referred to as coworking). Taken as a whole, the sharing services market has become increasingly well known in the United States over the last four years, with 83 percent of people in the U.S. as of May 2018 being familiar with at least one sharing services company, compared to only 47 percent in 2015.
Of the home sharing companies, the most well-known is Airbnb, who provides an online platform allowing people to offer free space in their home to people seeking accommodation. The accommodation is only offered for a limited duration, making the service similar to a hotel except provided in a private residence. Over the last three years, the service has seen a noticeable increase in users in the United States, from 30.4 million in 2016 to a projected 43.2 million in 2018. As of September 2017 there were 38,745 properties available through Airbnb in New York and 17,358 in Los Angeles.

The largest two companies in the U.S. ridesharing market are Uber and Lyft. Both these companies use a smartphone app to match drivers with passengers at short notice for one-off shared rides to an agreed location. In this they operates similar to a taxi service, except that the ride is offered in a private vehicle. Both Uber and Lyft are highly recognized brands within the United States - as of May 2018, 76 percent of people claimed to be familiar with Uber and 66 percent with Lyft.

The office sharing category is slightly different, in that shared office space is generally rented directly from a company which owns the space, rather through a service connecting private individuals. However, the category is still included in the sharing services market as the office space is broadly furnished by the provider, rented for a limited period and shared with other users. This allows workers to obtain space in a variety of geographic locations as needed. The two largest coworking office providers in the U.S. as of February 2018 are Regus, who leased over 9.4 million square feet of shared office space, and WeWork, who leased around 6.5 million square feet. Coworking is less well known than other sharing services, with only 17 percent of people in the U.S. being familiar with the service as of May 2018.

In the following 4 chapters, you will quickly find the 28 most important statistics relating to "Sharing services in the U.S.".

The most important key figures provide you with a compact summary of the topic of "Sharing services in the U.S." and take you straight to the corresponding statistics.

Ridesharing services in the U.S. 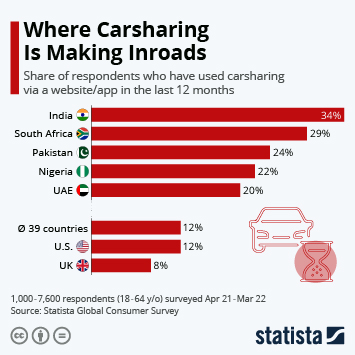