Airbnb began in 2007 when roommates Brian Chesky and Joe Gebbia started AirBed & Breakfast on the living room floor of their San Francisco apartment. In 2008, Nathan Blecharczyk joined AirBed & Breakfast and Airbedandbreakfast.com was launched (the website name was shortened to Airbnb.com shortly afterwards). Airbnb is primarily an online accommodation rental marketplace which enables hosts to rent out their properties or rooms to guests. It has also expanded to offer “experiences” which the company describes as “unique activities we can do together, led by a world of hosts”. In 2011, the company started its overseas expansion, opening its first international office in Hamburg, Germany. Though the company began as a privately owned business, it went public in 2020. Airbnb does not actually own the properties it offers for rent on its website, but rather generates its revenue through service fees to hosts and guests. In 2021, the company value of Airbnb was 113 billion U.S. dollars.

Where are Airbnb’s biggest markets?

With consumers looking for more authentic experiences and lower travel costs, the home-sharing economy has seen growth across the globe. Airbnb is currently the leader in the home-sharing market and since its efforts to globalize began in 2011, the company has entered the accommodation market in most countries around the world. As of 2021, North America generated the majority of Airbnb’s revenue worldwide with a sum of 3.2 billion U.S. dollars. Meanwhile, the EMEA region, which consists of Europe, the Middle East, and Africa combined, brought in 1.9 billion. When looking at the total number of Airbnb nights and experiences booked worldwide, the EMEA region took the lead with 118.1 million bookings in 2021. This was over four million more bookings than in North America. In 2021, Airbnb reported its highest gross booking value which amounted to 46.88 billion U.S. dollars.

The impact of COVID-19 on Airbnb

Though Airbnb has grown massively since its founding in 2007, the coronavirus (COVID-19) pandemic stalled this progress in 2020. This can be seen clearly in the number of nights and experiences booked with Airbnb in 2020, which dropped to under 200 million. Comparatively, the previous year accounted for approximately 327 million bookings. The possibility of booking accommodation via Airbnb largely depended on local regulations and the progress of the virus, with some months of the year being less conducive to travel than others. For example, the monthly change in Airbnb bookings worldwide declined in December 2020 to nearly 80 percent below the previous year’s figure. Meanwhile, when looking at the European market, specifically in Spain, France, Italy, and the United Kingdom this instability could be seen in the year-over-year (YoY) change in weekly vacation rental reservations. After the first quarter of 2020, this figure saw a decline, taking its biggest drop mid-year with all four countries hovering around negative 100 percent. Towards the end of 2020, this decline was not as large, however, it never reached more than zero.
This text provides general information. Statista assumes no liability for the information given being complete or correct. Due to varying update cycles, statistics can display more up-to-date data than referenced in the text.
Published by S. Lock, Jun 13, 2022

The most important key figures provide you with a compact summary of the topic of "Airbnb" and take you straight to the corresponding statistics. 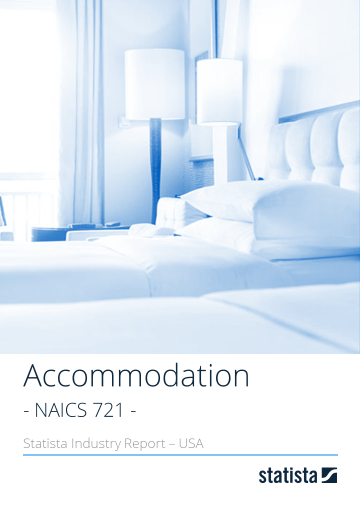