40k
57k
41k
9.6k
The U.S. is continuing its trade war with China. On Friday, President Trump announced via Twitter that he would hike the new tariffs on Chinese goods even before they were imposed - from an announced 10 percent on US$ 300 billion to 15 percent on those US$300 billion. Another US$250 billion, previously taxed at 25 percent, will now be taxed at 30 percent, starting October 1. China had previously announced retaliatory measures for the tariffs Trump had declared in early August. The country will put a tax of 5 to 10 percent on American goods worth US$75 billion, starting on September 1 - the date initially used by Trump as a start date for the new tariffs.

While China has repeatedly hit the U.S. back with tariffs, they haven't always matched those imposed by the U.S. in size.

In May, a tariff hike from 10 to 25 percent on US$200 billion worth of goods last took effect. After a truce and renewed talks between Beijing and Washington in the beginning of the year had brought about no resolution, the Trump administration followed through with its plan to hike up the tariffs. China also raised its tariffs, but they remained at a lower level.

The back-and-forth between the two nations began in early 2018 when President Trump announced tariffs on solar panels and later on steel and aluminum for all countries. China, a top player in the solar planel and steel industries, retaliated with tariffs on $3 billion worth of U.S. imports. Tariffs on fifty billion dollars worth of goods announced in June 2018 were periodically rolled out over the summer. After a first round of failed negotiations, a second round of tariffs hit in September 2018, then at the lower percentage rate of 10 percent in the case of the U.S. and 5-10 percent in case of China. 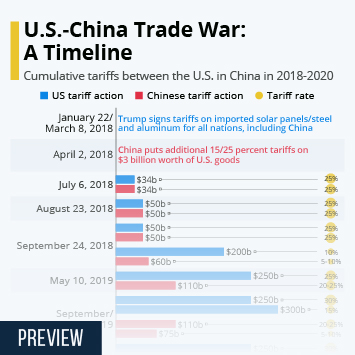 This chart shows tariffs imposed in the U.S.-China trade war in 2018 and 2019 as a cumulative value of affected imports.