Published by
Christina Gough,
Jul 11, 2021
The Minnesota Twins are a professional baseball franchise competing in Major League Baseball in the American League's Central division. The franchise was founded in 1901 as the Washington Senators, until the name was changed in 1905 to the Washington Nationals. After moving to Minnesota ahead of the 1961 season, the team was renamed to the Minnesota Twins. In 2009, James Pohlad inherited ownership of the Twins from his father who purchased the team in 1984.
The franchise value of the Minnesota Twins surpassed the one-billion-dollar mark in 2017, reaching an estimated 1.33 billion U.S. dollars in 2021. The team's revenue has grown steadily over the past few years yet only amounted to 111 million U.S. dollars in 2020. The operating income of the Minnesota Twins for that season generated a deficit of 49 million U.S. dollars, a harsh decline in that year as will all other professional sports clubs due to the COVD-19 pandemic.

The average attendance at Minnesota Twins games stood at more than 28 thousand in the 2019 season, with a total attendance of 2.29 million. The average ticket for the Minnesota Twins sold for 32.68 U.S. dollars for a home game in the 2019 season. The team has a large community of fans and followers on social media. Its Facebook account has amassed around 1.2 million fans, and the follower count on Twitter exceeds 600 thousand fans.

In the following 4 chapters, you will quickly find the 40 most important statistics relating to "Minnesota Twins". 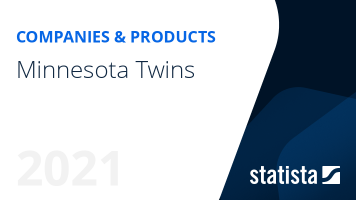 The most important key figures provide you with a compact summary of the topic of "Minnesota Twins" and take you straight to the corresponding statistics.