Bread is one of the oldest man-made foods, and remains to this day a staple in diets around the world. Canada is no exception to this, with retail sales of bread remaining high and growing year on year. To keep up with this growing demand, there are over 2,100 bakery product manufacturing establishments and more than 1,200 retail bakeries in Canada, most of which are located in Ontario.
Your average loaf of sliced packaged bread is Canada's favorite type to purchase in stores. A recent survey found that for over one quarter of survey respondents packaged sliced bread was their favorite bread product, second to bagels. Despite this, some consumers still believe that it is worth paying more for artisanal or craft bread. In particular those aged between 45 and 54, with 29 percent of survey respondents saying they would pay more. Sales of both flat and leavened unpackaged or artisanal bread are forecast to grow in the coming years.

Despite this increase in spending on baked goods, a fair share of the population are trying to limit their bread intake. Survey respondents aged 55 and over appear to be the most health conscious in this respect, with 45 percent attempting to cut down on bread consumption.
This text provides general information. Statista assumes no liability for the information given being complete or correct. Due to varying update cycles, statistics can display more up-to-date data than referenced in the text.
Published by Emma Bedford, Nov 17, 2022

Revenue of the bread and bakery products market in the U.S.
67.99bn USD

Revenue of the bread & cereal products market worldwide by country 2019

Revenue of the bread and bakery products market in Canada
4.77bn USD

Revenue of the bread & cereal products market worldwide by country 2019

Number of retail bakeries in Canada by region 2021 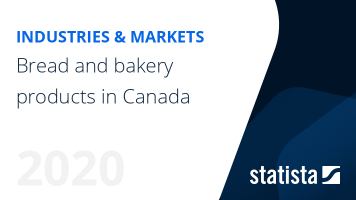 The most important key figures provide you with a compact summary of the topic of "Bread and bakery products in Canada" and take you straight to the corresponding statistics.

Food retail in Canada
Bread and bakery products in the U.S.
Snack foods in Canada