Bread and bakery products in the UK - statistics and facts

In the United Kingdom, bread is a staple food and routinely gets eaten in significant quantities by a large part of the population. While it was even more relevant for people's diets over a decade ago, consumers still buy over half a kilogram of bread every week. Even without taking other baked goods into account, the UK bread market was worth over 6.9 billion U.S. dollars. The volume of bread sold on the UK market came to over 1.9 billion kilograms.

Sales of bread and fresh pastry manufacturers amount to around 6.1 billion British pounds in the UK. During the last five years, sales have remained relatively stable. In the UK, among a total of approximately 2720 companies producing bread there are about 20 manufacturers of bread and a fresh pastry with a turnover of more than 50 million British pounds. The baked goods produced in the UK that are not consumed by the local populace, are most likely to beexported to Ireland, which is the UK's most important trading partner for bread and baked goods.

The most popular type of bread in Britain is still white bread, although its popularity has suffered a bit in recent years due to the trend towards gluten-free products. Brown or wholemeal bread was the second most popular type of bread in Britain. Of the available forms of bread consumers prefer sliced bread over all other types. Even taken together, bagels, baguettes, rolls, and croissants reach fewer Brits than simple, sliced bread. Over 26.5 million British consumers eat sliced bread and more than half of them eat sliced bread every day. Warburtons, Hovis, and Kingsmill are the three leading brands on the British bread market, putting Tesco's private-label brands in a distant fourth spot.
This text provides general information. Statista assumes no liability for the information given being complete or correct. Due to varying update cycles, statistics can display more up-to-date data than referenced in the text.

Volume of bread sold in the UK
1.9bn kg

Retail sale of baked goods: enterprises in the UK 2022, by turnover size band

Leading brands of bread in Great Britain 2017-2020, by number of users 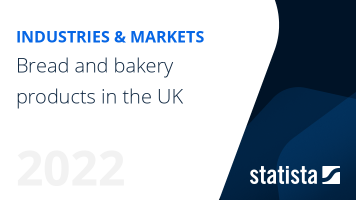 The most important key figures provide you with a compact summary of the topic of "Bread and bakery products in the UK" and take you straight to the corresponding statistics.