Bread and bakery products in Europe - statistics and facts

Bread is a food staple in most countries in Europe, and many people eat bread or wheat-based meals at least once a day. Organic bread, like other organic food products, has become more and more popular in recent decades. In terms of organic bread, Germany has the largest market share in Europe, with approximately 8.5 percent of its bread market being made up of organic bread. Germany is followed by France and Italy with the next biggest markets for organic bread.

The production of fresh bread and rolls in Germany has increased steadily during the last 15 years. In 2020, roughly 5.6 million tons of fresh bread and rolls were produced in Germany, compared to 4.1 million tons in 2005. The gross salary costs in the bakery products manufacturing industry in Germany have increased in tandem, amounting to almost four billion euros in 2020. Germany's neighbor Denmark has seen a stable number of employees in the manufacture of bread, pastries, and cake in Denmark in recent years. The country's sector employs 2,230 people on a full-time basis. Revenue from the production of bread and fresh bakery products in the Netherlands amounts to over two billion euros. In the United Kingdom (UK), the sales from the manufacture of bread, fresh pastry goods, and cakes are nearly 6.1 billion British pounds.

In Poland, there has been a steady decline in the monthly consumption of bread per capita. While the average Pole ate nearly 6.6 kilograms of bread and bakery products every month in 2000, in 2020 it was only 2.75 kilograms. In the UK, a similar trend can be detected among the average weekly household consumption of bread. The average British person consumed nearly 692 grams of bread in 2006. This figure declined to 524 grams in 2019/20. Nonetheless, although Brits are consuming less bread, the average weekly expenditure per person on bread in the UK has increased during the same period. Among the leading brands of bread ranked by the number of users in the UK, the most popular brand is Warburtons, with an estimated 11.4 million consumers per year. In Denmark, the average household consumption expenditure on bread amounts to approximately 2,180 Danish kroner.
This text provides general information. Statista assumes no liability for the information given being complete or correct. Due to varying update cycles, statistics can display more up-to-date data than referenced in the text.
Published by Statista Research Department, Mar 11, 2022

Revenue of the bakery products production in the Netherlands 2008-2020

Leading brands of bread in Great Britain 2017-2020, by number of users 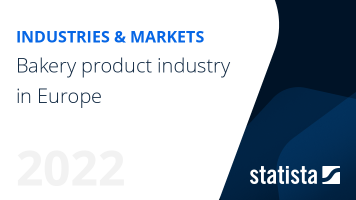 The most important key figures provide you with a compact summary of the topic of "Bread and bakery products in Europe" and take you straight to the corresponding statistics.