Homicide in Latin America and the Caribbean - Statistics & Facts

Published by Statista Research Department, Apr 23, 2020
Latin America has been labeled the “murder capital of the world” and is considered one of the most violent regions around the globe. Since the 1980s, most Latin American and Caribbean countries have faced a challenging scenario of recurring economic crisis and social inequality. This unfortunate situation, also characterized by high unemployment rates and poorly financed education systems, is the main factor causing the subcontinent’s violent crime problem. The lack of basic infrastructure inherited from colonial times, as well as the resulting power imbalance between the global North and South have also contributed to the consistent, violent realities of Latin America. The degree of severity, nonetheless, varies among countries: for instance, Venezuela was the nation with the highest homicide rates in the region in 2019, with an average of 60 victims per 100,000 inhabitants, followed by Jamaica and Honduras. More specifically, four cities in Brazil, two in Mexico and two in Venezuela were among the most murder-plagued Latin American municipalities.
Mexico and Central America

In Mexico, the number of homicides has been increasing since 2015. One of the reasons can be traced back to 2006, when the government deployed armed forces to combat drug cartels in the national territory. However, those attempts have often proved ineffective, and sometimes counterproductive, causing a surge of violent occurrences in some areas, instead of preventing them. In recent years, violence and homicide have had a great impact on the Mexican economy; the cost of preventing and containing violence per capita can be five times the average wage of a Mexican worker. In 2019, some of the Mexican states with the highest number of homicides were Guanajuato and Mexico, with this type of violence mostly occurring in the country's urban centers.

In the case of Central America, even though many of these countries usually top the regional homicide rankings, there have been efforts to improve the fight against violent crime in the past few years, such as anti-gang measures. It is difficult to say whether these actions have proved effective, but recent data shows a considerable fall of the murder rate in the Northern Triangle of Central America, namely Guatemala, El Salvador, and Honduras. In El Salvador, the number of homicides every 100,000 people has decreased 65 percent since 2015. A similar decline in the homicide rate has been identified in Honduras, once described as the “world’s most murderous country”, and in Guatemala in recent years. All the while, this seemingly positive tendency has occurred alongside the immense exodus of migrants escaping these countries’ fragile economies and rule of law, aiming for Mexico and, ultimately, the United States.

In 2019, Jamaica, Trinidad and Tobago, Puerto Rico and the Dominican Republic registered some of the highest homicide rates in the whole Latin American and Caribbean region. It was estimated that more than 43 people every 100,000 inhabitants were murdered in the Puerto Rican capital every year, whereas Port-au-Prince, the capital of Haiti, was among the Caribbean cities with the highest number of murder victims. In the Dominican Republic, the most unsafe regions based on number of homicides in 2018 were the province of Santo Domingo, followed by the country's capital, Santo Domingo City, and the province of Santiago.

Venezuela is, without a doubt, the country that is worse-off among all its South American neighbors, at least when it comes to crime rates. The country has been through years of political and economic turmoil, mostly since 2013, when Nicolás Maduro succeeded Hugo Chávez as president. Lately, crime in Venezuela has intensified due to the population’s increasingly unmet needs, whereby basic goods and services such as food, water or electricity are not always available. From 2014 to 2016, the homicide rates in Venezuela greatly fluctuated, though a downward trend can be identified since 2017. Regarding the most dangerous cities in the country, Caracas and Guayana were the ones with the highest number of murder victims in 2018.

Another South American country facing considerable crime and violence problems is Brazil. Almost ten percent of the country’s population, roughly 20 million people, live below the poverty line. In the past years, the Northeast region of Brazil had the highest number of homicides, followed by the Southeast and the North region. In 2018, Natal and Fortaleza were the cities with the highest homicide rates.

In the following 4 chapters, you will quickly find the {amountStatistics} most important statistics relating to "Homicide in Latin America & Caribbean".

The most important key figures provide you with a compact summary of the topic of "Homicide in Latin America & Caribbean" and take you straight to the corresponding statistics.

Crime and punishment around the world

Hate crime in the United States 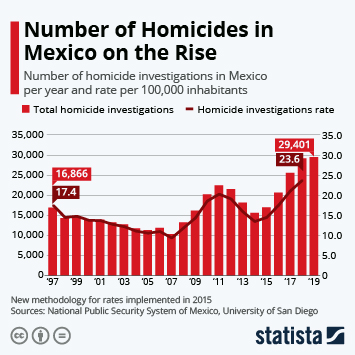 Marina Pasquali
Research expert covering economy, politics and society
Get in touch with us now