The Indian petroleum industry started its journey at a very slow pace from a place called Digboi, in the state of Assam. The production of petroleum and new extraction locations were manly limited to the North-Eastern parts of the South Asian country till the 1970s. In the beginning, the government completely subsidized the entire market. In July 1991, with economic liberalization and privatization, the Indian government started giving industrial control to private hands and entered into joint ventures. This gave the sector a tremendous boost and allowed it to grow. In 2020, the production volume of petroleum products in the country amounted to more than 195 million metric tons. Since then, the impact of the private sector on the petroleum industry has been immense. Through the private sector, there was a refinery capacity addition of almost 90 million metric tons in 2020. India is the second largest refiner in Asia, second only to China.

Due to its rapid growth, the industry has had a lot of opportunities for investments from foreign players. Petroleum gas, propane, distilled crude oil, and kerosene are some of the major products manufactured for foreign trade. Petroleum products accounted for the highest share in Indian exports in 2020, at 14 percent. The export volume of petroleum products was estimated to be around 66 million metric tons. The Oil and Natural Gas Commission (commonly known as ONGC) is the largest crude oil and natural gas company in the country. The ONGC accounted for almost 70 percent of India’s domestic production; it was the only Indian public sector company to secure a spot in Fortune’s ‘Most admired energy companies’ list. Indian Oil Corporation on the other hand, is the largest commercial oil company in India. With over 47 thousand customer touchpoints, the company is the largest contributor to the national exchequer through duties and taxes.

Privatization of the Indian petroleum sector

Despite the industry starting its journey as a completely government run unit, privatization was presumably inevitable. The amount of investments required for further development had gone beyond the scope of even the biggest state-owned firms such as ONGC and Indian Oil Corporation. The lapse in investments further pushed the privatization process, with Bharat Petroleum the next company to be affected. In March 2020, the Indian government opened bids for its 53 percent stake in BPCL.

Investments and privatization in the petroleum sector became necessary owing to the country’s tremendous energy consumption. The annual growth in the energy consumption across the nation was about two percent in 2019. Even though there has been considerable efforts to switch to renewable energy, coal and oil remain the main sources of fuel.
This text provides general information. Statista assumes no liability for the information given being complete or correct. Due to varying update cycles, statistics can display more up-to-date data than referenced in the text. 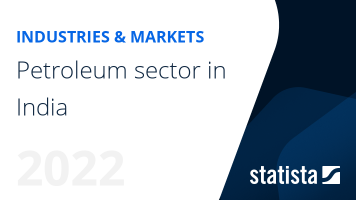 The most important key figures provide you with a compact summary of the topic of "Petroleum sector in India" and take you straight to the corresponding statistics.