Published by
Madhumitha Jaganmohan,
Jun 14, 2021
For the economic growth, development and welfare of nations, power acts as a crucial component. The power sector in the south Asian country of India is very diversified. Sources of power generation across the country ranged from conventional fuels such as coal, natural gas, crude oil to renewable sources such as hydro, wind and nuclear power. The demand for electricity in the country has increased rapidly and was expected to grow further in the years to come. A major portion of the electricity generation came from thermal energy. The private sector had a strong grip on the energy sector in 2019, amounting to an installed energy capacity of around 179,315 megawatts. The industry, however, had been subject to significant changes in the recent years to shift focus to more renewable sources of energy.

Coal production had been the focus of the government to meet energy demands of the world’s second largest population. In 2019, primary energy consumption in the country was dominated by coal. Coal amounted to over 75 percent of India’s energy supply in 2019 and over 50 percent of the installed capacity. According to the Central Electricity Authority, renewable sources of energy were expected to generate half of the country’s power by 2030, the other half however, was still expected to be generated through coal.

Natural gas and crude oil had been equally important fossil fuels along with coal. Natural gas could lead the way for a gradual transition from high carbon-intensive sources as the country aims to cut emissions. The installed natural gas capacity in India was around 24 thousand megawatts as of February 2021. Unlike coal, the power sector was not the leading consumer for natural gas within the nation - it was the heavy industries instead. Due to its abundant availability as well as its economic benefits, the natural gas sector had been an attractive investment area for the Indian government as well as foreign players. In 2019, the petroleum and natural gas sector was estimated to have FDI inflows of around 138 million U.S. dollars. The per capita natural gas consumption in the country was exponentially below the global average in 2019, giving way to infrastructure and economic opportunities to increase the share of natural gas in India’s energy mix.

In 2013, net crude oil and petroleum product imports made India the fourth largest consumer and net importer of oil related products. The transportation industry was one the major drivers for this demand. Despite having an onshore production volume of over 17 million metric tons in 2019, the crude oil import volume into the country increased by over 2.75 percent that year. The government aimed to cut the oil imports dependence by more than 60 percent by the year 2022. However, falling domestic production due to ageing fields and foreign competition, the policies and initiatives had been struggling to give satisfactory results.

The fossil fuel industry in India was likely to face some competition from renewable energy sources in the near future. The government had introduced taxes on fossil fuels, but on the other hand, subsidizes bulk purchases. A majority of the coal consumption came through power plants to generate electricity, whereas oil and natural gas were mainly used by the transportation industry. Climate change and climate action are likely to influence the dependency on fossil fuels. Fossil fuel combustion in India was responsible for about seven percent of global carbon dioxide emissions. The gas sector was estimated to emerge as the leading energy supplier across the country going forward. Gas was anticipated to fuel the robust economic growth in the country.

In the following 5 chapters, you will quickly find the 28 most important statistics relating to "Fossil fuel industry in India".

The most important key figures provide you with a compact summary of the topic of "Fossil fuel industry in India" and take you straight to the corresponding statistics. 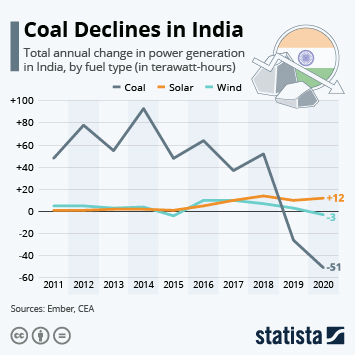