Hong Kong’s immediate neighbor, mainland China, had a smartphone market that was dominated by domestic smartphone manufacturers like Huawei, Oppo, and Vivo, with a total market share for all three of around 80 percent. However, the smartphone market in Hong Kong is more internationally oriented, with Apple and Samsung being the market leaders with a combined market share of over 83 percent at the end of 2021. In particular, the Apple iPhone has been the absolute favorite device among Hong Kong residents; it managed to keep the leading position in the market in the last few years with over 40 percent of market share.

In terms of technology, most of the mobile internet connections in Hong Kong were already utilizing 4G services as of 2020, with around 59 percent of mobile internet connections using at least 4G technology. This figure translated to over 19 million mobile 4G subscribers in total. The city is also well prepared for an upgrade to 5G. In 2019, the government of Hong Kong has announced that a 5G service will be launched in 2020 and has already achieved significant coverage.

The share of households in Hong Kong which were connected to the internet at home via a smartphone exceeded 99 percent as of March 2020, indicating an extremely heavy reliance on smartphones for internet access. Moreover, smartphone penetration rate reached over 99 percent among consumers who obtained post-secondary education, and the penetration rate was higher among women at a younger age than their male counterparts and the lowest among older population in the society.

In the following 4 chapters, you will quickly find the 21 most important statistics relating to "Smartphone market in Hong Kong". 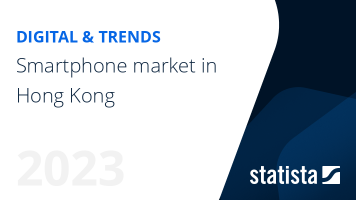 The most important key figures provide you with a compact summary of the topic of "Smartphone market in Hong Kong" and take you straight to the corresponding statistics.