Fish and seafood in the UK - statistics & facts

Published by
M. Shahbandeh,
Aug 31, 2022
The UK is home to many fish cuisines, due to its location in the world. Surrounding this island nation is the Atlantic ocean on the west, and the North sea on the east. The most commonly landed fish species in the UK are mackerel and herring, both of which are not suited for the dish. The fishing industry, while historically important in the United Kingdom, has faced many challenges in recent years. While fishery and aquaculture feeds a large majority of the world’s population, over-fishing has become increasingly persistent and threatens both the environment and global food supply. In 2021, annual expenditure on fish in the UK was 4.9 billion British pounds, down from 5 billion British pounds in 2006.

Seafood retail in the UK

As of 2020, there were 1,136 UK enterprises that specifically sold fish, crustaceans, and mollusks. This number was part of an ongoing downwards trend since 2008. That same year, the majority of seafood consumers in the UK purchased their fish chilled. In 2021, over 60 percent of retail sales in the seafood market were chilled products. Of these chilled seafood products, the largest chilled segment were natural products, without any breading or other preparation. This could be due to chilled products being seen as ‘healthier’ than other products. Chilled products, such as seafood, also gives consumers more flexibility with their longer shelf-life.

International seafood trade with the UK

Echoing this, the import value of fresh fish into the UK has stagnated in recent years before dropping drastically in 2021. The import value of frozen fish has generally increased, peaking in 2019. Interestingly, salmon and cod were amongst the most imported type of fish. Cod fishing is highly regulated in the UK, as cod stocks previously plummeted and once came very close to collapsing. The demand is still there, however, as cod is often the fish of choice in their famous dish ‘fish and chips’.

Consumer expenditure in the UK on fish & seafood

Since 2003, the consumer price index (CPI) on fish in the UK has risen considerably, meaning households are paying more today for the same amount of fish compared to 2003. The consumer price index on fish in the UK totaled approximately 64 in 2003, however today it stands at over 111. Several factors previously touched on are thought to influence the performance of the industry, and the corresponding CPI. People in the UK in the age bracket between 50 and 75 are the largest consumers of fish, spending upwards of four British pounds per week on fish products. This is in contrast to those under 30 years of age, who spend on average just 1.9 British pounds.

In the following 4 chapters, you will quickly find the 24 most important statistics relating to "Fish and seafood in the UK".

Statistics on the topic
Average expenditure on fish in the UK
4,928m GBP
Number of enterprises in the UK with a turnover more than 5m GBP
40
Fish landing volume in the UK by UK vessels
372,559mt 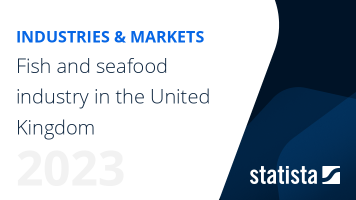 The most important key figures provide you with a compact summary of the topic of "Fish and seafood in the UK" and take you straight to the corresponding statistics.

Brexit and the food and beverage industry

Fish and seafood industry in Norway