Published by Statista Research Department, Sep 10, 2020
Female participation in sport and physical activity across England, Scotland, Northern Ireland and Wales exhibits considerable variability both by the country and by the sport. Many aspects of sport and sport participation within the United Kingdom (UK) have a long history of social exclusion. Despite substantial efforts by the governing bodies within many sports, numerous social barriers that prevent female participation continue to exist.
The health benefits of a physically active lifestyle are well documented and there is a large amount of evidence to suggest that regular physical activity can improve health and reduce the risk of developing several health conditions such as type 2 diabetes, cancer and cardiovascular disease. Insufficient physical activity is one of the leading risk factors for global mortality and is on the rise in many countries.

Despite these well-known benefits, the majority of the population fail to meet current physical activity guidelines. These statistics present an equally concerning underlying trend of a gender disparity within sports participation in the UK, whereby women across England, Scotland, Northern Ireland and Wales are less physically active and report lower levels of participation in both sport and physical activity than men.

Women first made their appearance in the Olympic Games in Paris in 1900, within which 22 women competed in tennis, sailing, croquet, riding, and golf. Pervading concerns over the physiology of women led to the discouragement of female participation in many physically challenging sports. In some cases this led to less physically demanding female versions of 'male' sports. Netball and softball are examples of some of these variants, which developed out of basketball and baseball respectively.

Even today women who participate in sports face many obstacles, including lower pay, less media coverage, and different injuries compared to their male counterparts. Many female athletes have engaged in peaceful protests, such as playing strikes, social media campaigns, and even lawsuits to address these inequalities. Although such movements have led to a recent rise in female participation in sports, a large disparity between male and female participation still exists. These disparities are prevalent globally and continue to limit gender equality in sports.

In the following 4 chapters, you will quickly find the 34 most important statistics relating to "Women's sports participation in the UK". 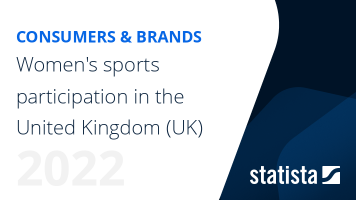 The most important key figures provide you with a compact summary of the topic of "Women's sports participation in the UK" and take you straight to the corresponding statistics.