Published by Statista Research Department, Mar 18, 2021
On March 24, 2020, the Japanese government announced the postponement of the Tokyo 2020 Summer Olympic and Paralympic Games as a result of the ongoing COVID-19 pandemic. The government agreed with the International Olympic Committee (IOC) in the following week upon the new opening dates, essentially keeping the original dates but changing it to 2021. This marked the first time in the era of modern Olympics, starting from 1896, that the Games had been postponed during peacetime, but the second time the Games could not be hosted by Tokyo as originally planned, the first time being in 1940.

More than just a sports competition

Modern Olympics have grown in various aspects including athlete participation, contested sports disciplines, and spectator numbers. The Games have turned into mammoth events, necessitating astronomical amounts of expenses from organizing entities. The Tokyo 2020 Olympics and Paralympics are no exception to this.
Why would any city voluntarily host the games, then? For one, hosting the Games puts cities on the center stage of the world’s attention for the period of the events, boosting the location’s reputation permanently. The host city preparation for the Games typically involves investments in a broad variety of areas, including in infrastructural projects such as transportation systems, architectural masterpieces, and, in general, technological modernization. The benefits reaped by hosting the Games are often intangible and hence difficult to quantify. Tokyo committed itself to this high-risk high-reward investment in 2013 when it won the bidding to become the host city in 2020. It was an attempt to repeat the positive economic and technological ripple effect the Tokyo 1964 Olympic Games had on Japan. For the Tokyo 2020 Olympics and Paralympics, organizers anticipated a positive economic ripple effect during the decade following the Games that would be multiple times higher than the original investment.

Increasing expenses and the COVID-19 dilemma

The cost of the Tokyo 2020 Olympic and Paralympic Games had already increased compared to the originally planned budget even before the advent of the COVID-19 pandemic. The initially planned 740 billion Japanese yen more than doubled, surpassing 1.6 trillion Japanese yen by the fifth version of the Tokyo 2020 budget released in December 2020. The COVID-19-induced postponement of the Games necessitated increased expenditure by involved entities. Depending on the scenario which the organizers will (be forced to) take, additional losses can be expected. Organizers are committed to hosting the Tokyo 2020 Olympics and Paralympics despite dwindling support by the local population. Ultimately, the Tokyo 2020 Olympics’ and Paralympics’ fate probably lies at the mercy of the World’s and Japan’s ability to keep the COVID-19 pandemic under control.

In the following 4 chapters, you will quickly find the {amountStatistics} most important statistics relating to "Tokyo 2020 Olympics and Paralympics in Japan".

The most important key figures provide you with a compact summary of the topic of "Tokyo 2020 Olympics and Paralympics in Japan" and take you straight to the corresponding statistics. 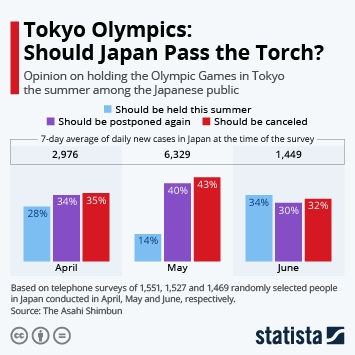