Published by
P. Smith,
Jan 12, 2022
The Italian eyewear sector is a leading global industry. Italy ranks among the countries recording the highest eyewear revenue and hosts some of the most important enterprises of the sector worldwide. In 2020, the production value of the Italian eyewear industry decreased to 3,089 million euros. This represented a 22.6 percent decrease comapred to 2019.

The Italian fashion industry generates about a billion euros of turnover annually from eyewear industry. The pandemic crisis, however, affected the Italian eyewear trade hugely. In 2020, eyewear exports decreased to 2.8 billion euros, while they amounted to almost 3.9 billion euros in the previous year. The European and the American markets represent the main destinations of Italian lenses, frames, sunglasses and eyeglasses. Especially the United States held about 28 percent of the export value, followed by France, Germany, and the United Kingdom. Further country-specific data showed that the slowest growing importing countries were Mexico, Emirates, and Spain.

The success that Italy has reached in this sector today actually has older roots. In the 1960s, a small eyewear business was founded in the north of Italy, which later became the largest eyewear company in the world: Luxottica. In 2018, the company merged with another leading firm, Essilor. The two companies became EssilorLuxottica. One year later, EssilorLuxottica recorded over 17 billion euros in revenue. Also, the Luxottica segment still accounts for the largest source of revenue for the company.

Another leading player from Italy on the global eyewear market is Safilo. Safilo was founded by the son of Italian emigrants in the United States in the 1930s. Today, the company is based in the north of Italy and generates annual revenues of almost one billion euros. De Rigo also represents a success story for Italian eyewear. Founded in the 1970s by two brothers, the company is highly present in the European market. In 2020, the revenue reached almost 346 million euros.

In the following 4 chapters, you will quickly find the 21 most important statistics relating to "Eyewear industry in Italy". 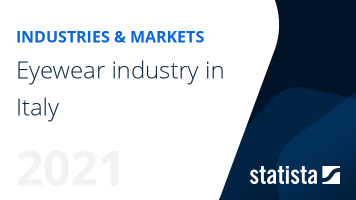 The most important key figures provide you with a compact summary of the topic of "Eyewear industry in Italy" and take you straight to the corresponding statistics.